Last year, the Toyota GR86 famously sold out in just 90 minutes, giving Glastonbury a run for its money in the popularity stakes. But there was another fast-selling in-demandcar that slipped under most people’s radar: the Hyundai Ioniq 6 First Edition, which was all gone in just 24 hours.

Granted, that’s not quite Billie Eilish fast, but for an electric car, and a Hyundai at that, it’s still some statement. As a result of its global popularity and the (yawn) ongoing supply problems, we’re only just getting into a first review of the car in the UK, despite it being available in Korea back in October. The proper dealer allocation won’t even come through until March, with UK prices for the Ioniq 6 starting at £46,745.

What can people expect when it does finally arrive? Certainly one of the more individually styled cars on the road. I was in the design preview briefing for the Ioniq 5 with Hyundai chief creative officer Luc Donckerwolke and thought at the time that car was punchy, but on the road the 6 is arguably even more distinctive, with its streamliner profile and twin-deck rear.

It’s based on the same E-GMP platform as the 5 and comes with the same 77kWh battery that has recently been dropped into its sibling. Thanks to its reduced drag coefficient of 0.21, the rear-wheel-drive Ioniq 6 can do a claimed 338 miles between charges. That’s not only a useful bit more than the 5 but also within a whisker of the Tesla Model 3 Performance. Like all EVs, though, that drops in winter and our test range was 230 miles. 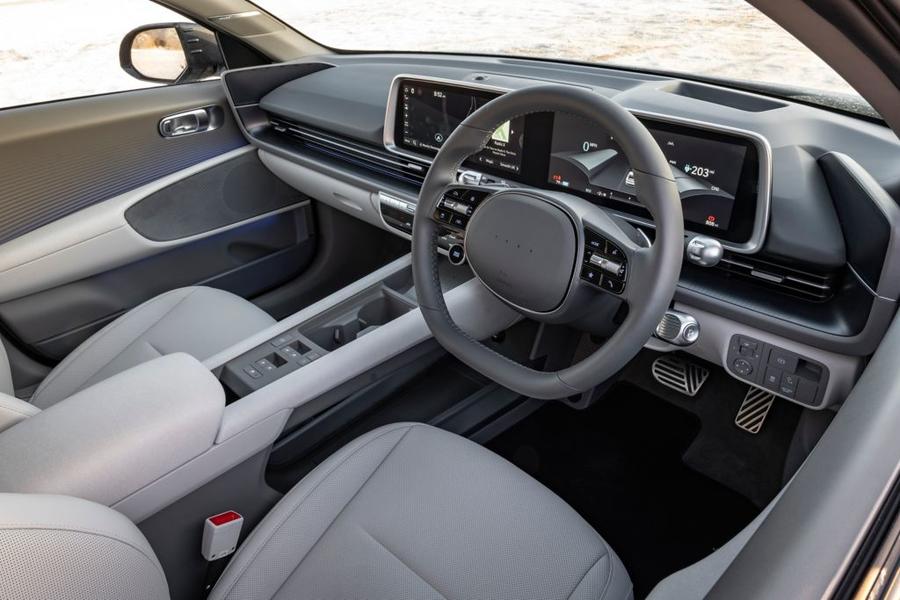 There is also a twin-motor all-wheel-drive 6, which gets 16 miles less range but lops 2.3sec off the 0-62mph time. Our rear-driver manages a reasonable 7.4sec, which is more than adequate for most situations, even if it can’t compete with Tesla’s clickbait figures.

The 6 is available in two trims (if you ignore the limited First): Premium from £46,745 and Ultimate, tested here, at £50,245. Interestingly, these figures aren’t too dissimilar to the 5’s, a ploy by Hyundai to offer two solutions depending on needs and tastes.

Normally, I’d stick to the lower trim but in this case the Ultimate makes more sense because it gets the kit you’d want: plush Relaxation front seats with ventilation, improved audio, an excellent head-up display and a 360deg camera.