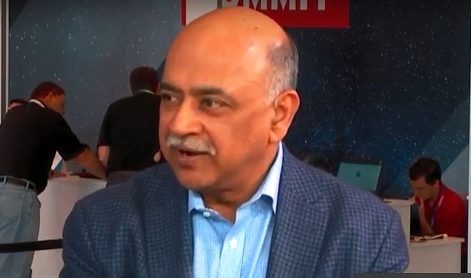 Revenue rose 16%, to $15.54 billion in constant currency terms, and rose 9% from the $14.22 billion IBM reported in the same quarter a year ago after adjusting for the spinoff of managed infrastructure-service business Kyndryl Holdings Inc. Net income jumped 45% year-over-year, to $2.5 billion, and diluted earnings per share of $2.31 a share were up 43% from a year ago.

Analysts had expected adjusted earnings of $2.26 a share on revenue of $15.08 billion.

The strong numbers weren’t a surprise given that IBM had guided expectations toward high single-digit growth, and there was no clear reason why the stock declined. The selloff may have been in response to slightly smaller gross profit margins in the software, consulting and infrastructure businesses in the quarter. Free cash flow was also down slightly this quarter compared to a year ago, although up significantly for the first six months of the year.

It’s also possible that a report saying Apple was looking at slowing down hiring, which caused the overall market to fall slightly today, might have spilled over to other tech stocks such as IBM in the extended trading session.

On the whole, the company delivered what it said it would. Its hybrid platform and solutions category grew 9% on the back of 17% growth in its Red Hat Business. Hybrid cloud revenue rose 19%, to $21.7 billion. Transaction processing sales rose 19% and the software segment of hybrid cloud revenue grew 18%.

With investors on edge about the risk of recession and his potential impact on technology spending, Chief Executive Arvind Krishna (pictured) delivered an upbeat message. “There’s every reason to believe technology spending in the [business-to-business] market will continue to surpass GDP growth,” he said. “Demand for solutions remains strong. We continue to have double-digit growth in IBM consulting, broad growth in software and, with the z16 launch, strong growth in infrastructure.”

Krishna called IBM’s current sales pipeline “pretty healthy. The second half at this point looks consistent with the first half by product line and geography,” he said. He suggested that technology spending is benefiting from its leverage at reducing costs, making the sector less vulnerable to recession. ”We see the technology as deflationary,” he said. “It acts as a counterbalance to all of the inflation and labor demographics people are facing all over the globe.”

With IBM being the first major information technology provider to report results, Pund-IT Inc. Chief Analyst Charles King said the numbers bode well for reports soon to come from other firms. “The strength of IBM’s quarter could portend good news for other vendors focused on enterprises,” he said. “While those businesses aren’t immune to systemic problems, they have enough heft and buoyancy to ride out storms.”

One area that IBM has talked less and less about over the past few quarters is its public cloud business. The company no longer breaks out cloud revenues and prefers to talk instead about its hybrid business and partnerships with major public cloud providers.

“IBM’s primary focus has long been on developing and enabling hybrid cloud offerings and services; that’s what its enterprise customers want, and that’s what IBM’s solutions and consultants aim to deliver,” King said.

Krishna asserted that, now that the Kyndryl spinoff is complete, IBM is in a strong position to continue on its plan to deliver high-single-digit revenue growth percentages for the foreseeable future. Its consulting business is now focused principally on business transformation projects rather than technology implementation and the people-intensive business delivered a pretax profit margin of 9%, up 1% from last year. “Consulting is a critical part of our hybrid platform thesis,” said Chief Financial Officer James Kavanaugh.

Pund-IT’s King said IBM Consulting “is firing on all cylinders. That includes double-digit growth in its three main categories of business transformation, technology consulting and application operations as well as a notable 32% growth in hybrid cloud consulting.”

Kavanaugh said these are unknown waters but the company is prepared. “The velocity of the [dollar’s] strengthening is the sharpest we’ve seen in over a decade; over half of currencies are down-double digits against the U.S. dollar,” he said. “This is unprecedented in rate, breadth and magnitude.”

Kavanaugh said IBM is more insulated against currency fluctuations than most companies because it has long hedged against volatility. “Hedging mitigates volatility in the near term,” he said. “It does not eliminate currency as a factor but it allows you time to address your business model for price, for source, for labor pools and for cost structures.”

The company’s people-intensive consulting business also has some built-in protections against a downturn, Kavanaugh said. “In a business where you hire tens of thousands of people, you also churn tens of thousands each year,” he said. “It gives you an automatic way to hit a pause in some of the profit controls because if you don’t see demand you can slow down your supply-side. You can get a 10% to 20% impact that you pretty quickly control.”