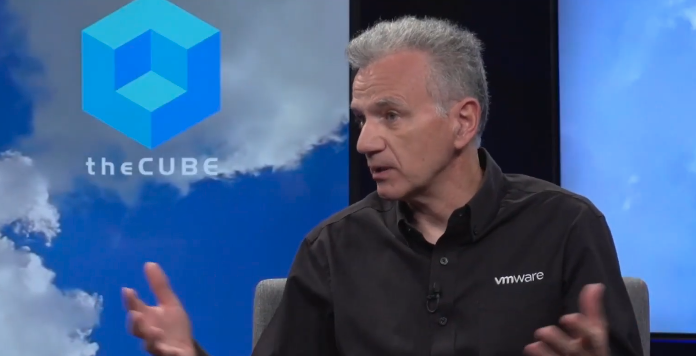 The history of information technology has seen a series of abstractions building on top of each other to create the complex computing environments that we operate in today.

As the fundamental theorem of software engineering goes: “We can solve any problem by introducing an extra level of indirection.” The humorous flip side is the addition “… except for the problem of too many levels of indirection.”

Cloud computing is an apt illustration of this insider joke. Cloud (via virtualization) brought simplicity by abstracting IT infrastructure. But, companies haven’t stopped with just one public cloud. Multicloud is now the predominant enterprise IT architecture, with 73% of enterprises using two or more public clouds (plus on-premises and private clouds, and possibly edge computing as well), according to research by VMware Inc..

“If you look at IT, we always needed abstraction to unleash the next level of growth,” said Vittorio Viarengo (pictured), vice president of Cross-Cloud services at VMware. “Now we need to bring a level of abstraction in the cloud that not only abstracts the low-level APIs at the highest level, but also uniforms and unifies the APIs and the way to do management and security across multiple clouds.”

Viarengo spoke with theCUBE industry analysts John Furrier and Dave Vellante for the opening keynote “The Future of Cloud has Arrived” at the Supercloud 22 event, during an exclusive broadcast on theCUBE, SiliconANGLE Media’s livestreaming studio. They discussed the need for a new abstraction layer in the cloud that creates connections and a common experience across locations while at the same time allowing developers simplified access to core primitives.

“The lingua franca of the cloud is not the virtualization layer,” Viarengo stated. Instead, the common language of cloud is a complex one built out of the multitude of microservices, application programming interfaces, and containers that compose the orchestration layer of the cloud. It is this that is creating headaches for the operations and security teams who have to deal with making sure technology works and is secured in the disorganized environments that comprise most of today’s multiclouds.

The reason operations and security are playing catch-up in multicloud is because it is developers that run the show, according to Viarengo. And with the DevOps revolution transforming how companies operate, if traditional operations teams aren’t paying attention, they get left eating the dust the developers kick up as they head off on their next sprint.

Multicloud strategy spans the spectrum from denial to enlightenment

There are five stages of multicloud occurring within organizations, according to Viarengo. First is denial that multicloud is happening, where the company says: “We are on-premises and maybe we have one cloud. That’s it. We’re standardized,” he stated.

Next is the euphoria stage, where companies are experiencing improved application and workload performance, scalability, and security, thanks to using multiple clouds and services. This is where operations and security can drop the ball by giving developers the freedom to build and configure systems without guidelines.

Reality hits with the third stage when the cloud use bills start piling up and understanding of the responsibilities associated with shared model security and application management dawns. Out of this comes the fourth stage, which Viarengo calls “the new normal,” characterized by organizations working out how they will handle the challenges of multicloud. Ideally, this will lead to the final stage, which is where multicloud is implemented in a strategic, productive and secure manner and applications are designed to take advantage of the differentiated services and features available from each of the multiple clouds.

However, very few customers are in that final stage, according to Viarengo. “Most customers are still within the denial and the new normal,” he said.

Supercloud provides a way for organizations to move beyond that new normal and into cloud enlightenment. While many feel the concept is still aspiration, VMware has been laying the groundwork for simplifying multicloud since before the acquisition of Pivotal Software Inc.

“Over the last five years, we built [a] very comprehensive portfolio that unified how you build you run, manage secure and access any application across any cloud. No hypervisors are required,” he said.

In other words, VMware is making supercloud a reality through the functionality of its Tanzu cloud-native application platform and Cross-Cloud services.

“To us, the supercloud is the ability to factor out the common things that you can do across cloud and give you a single pane of glass to manage your application and [a] single pipeline so you can build the application once and deploy it consistently across multiple clouds,” Viarengo stated.