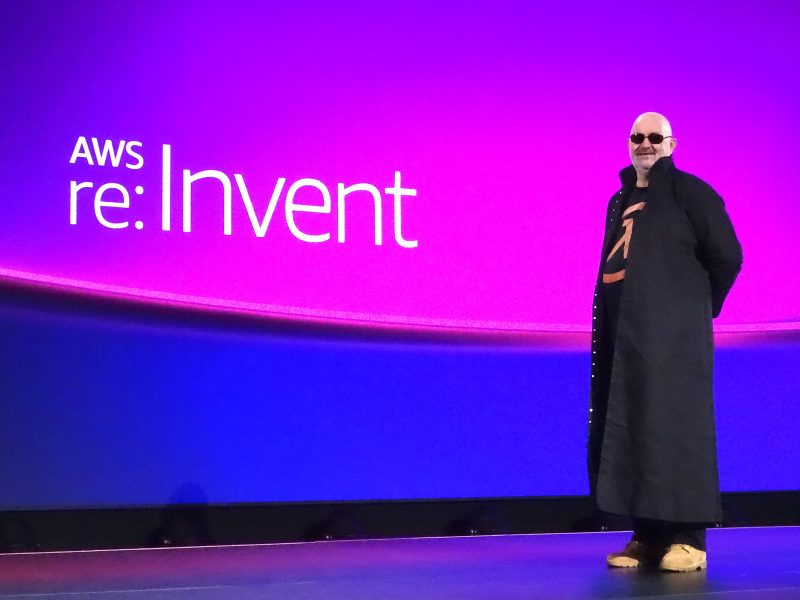 The annual AWS re:Invent keynote from Amazon.com Inc. Chief Technology Officer Werner Vogels has traditionally covered a significant amount of scientific and technical ground, and today’s presentation before a packed house in Las Vegas was no exception.

Interspersed among several new announcements from AWS, Vogels weighed in on Amazon’s earliest systems design principles, the value of event-driven architectures, biodiversity, 3D simulation and ways we can learn from the asynchronous characteristics of bird murmurations.

The central message was that an asynchronous world leads to loosely coupled systems and a resulting computing architecture that can and should evolve easily.

“We should make progress in all circumstances, so matter what happens in our world,” said Vogels, dressed in a T-shirt displaying the Lambda symbol from the “Half-Life” science fiction universe — a departure from his usual band T-shirts. “The benefit of loosely coupled systems is the evolvable architecture. Evolvability is extremely important when you think about your systems. It’s evolve or die.”

Tools for workloads and applications

AWS made several announcements on Thursday designed to support developers and further the cause of systems evolution. One of these was the launch of a distributed map for AWS Step Functions to orchestrate large scale parallel workloads and process huge datasets rapidly.

The company also introduced AWS Application Composer as a new tool for visually designing and building serverless applications. “Workflows enable us to build apps from loosely coupled components,” Vogels said. “You should be using serverless components to stitch together the systems that you want.”

“Events are composable,” Vogels said. “You can stitch things together to create a bigger application. It’s not just easily composable, it also has an ability to manipulate events that are flowing through your pipe.”

Vogels’ presentation is generally well-attended, particularly by developers interested in news from AWS around tools that will make their jobs easier as well as a broader picture of where computer architecture is heading in the future. In addition to the EventBridge release, the company also announced Amazon CodeCatalyst, a unified software development service that makes it faster to build and deliver on the cloud provider’s platform.

Concurrent with his keynote presentation, Vogels also posted his annual predictions list for the coming year. They include an expectation that cloud technologies will redefine the industry with analytics and insights generated from wearables, video streams and IoT sensors becoming a force in nearly every sport.

Vogels also predicted that there will be a surge of innovation in smart energy, the supply chain will be transformed by technology, simulated worlds will become more prevalent, and custom silicon will go mainstream.

If that last forecast comes true, AWS will be in a significant position to benefit. The company made a number of announcements this week around its Graviton, Nitro, and Trainium custom chip initiatives, and Vogels pointedly noted that there are 100 million EC2 instances fired up every single day.

Before taking the stage for his keynote address today, Vogels appeared in a short video parody of the 1999 sci-fi classic “The Matrix.” When offered the now famous choice from the film of taking the red pill and experiencing a life-changing learning experience or the blue pill to remain in a state of contented ignorance, Vogels chose the red. The choice catapulted him into a rigid, synchronous world where something as simple as ordering a burger with fries was excruciating.

“I really should have taken the blue pill,” said Vogels.