“His face just kind of dropped.”

James Corden is sharing what was behind his exit from “The Late Late Show.”

While appearing on Monday’s episode of “The Drew Barrymore Show,” the 44-year-old late-night host explained how his family influenced his decision to depart the CBS show after what will be over eight years. 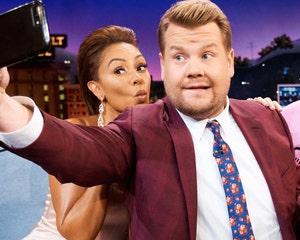 After Barrymore asked what led him to “walk away,” Corden said, “Look, it’s not easy in any way to walk away from something that is so … I mean I’ll never work in a better environment than the one I work in now. Nothing about leaving the show was to do with not enjoying it. I love it, but the truth is it became a very easy decision because I always knew it was an adventure and I never ever considered it to be the final destination.”

Corden — who shares son Max, 11, and daughters Carey, 8, and Charlotte, 5, with his wife Julia — then brought up a conversation he had with Max back when he was filming the series, “Mammals,” a couple of years ago.

“Two summers ago, one day, I was filming on a Sunday and I came downstairs, it was about 6am and my son, who was 10 at the time, was sat on the stairs and he said, ‘Are you working today?’ and I said, ‘I am,'” he told Barrymore, 47. “And he said, ‘I thought, but, it’s Sunday,’ and I said, ‘I know, buddy, but this schedule’s just so all over the place. We just got to get it done because we only have a tiny amount of time before we have to go back and do the show,’ and his face just kind of dropped.”

“I got in the car and I called my wife Jules and I said, ‘I’ve realized, best-case scenario … we have six more summers where Max is like, even remotely wants to be around us and I cannot waste another one,” the actor added. “So, really the choice was to go, ‘Well if I want to do this other work, that cannot be at the expense of our children, our family,’ and that is really all it comes down to.”

However, Corden admitted that he’ll “be a mess” while filming his last show.

“I will cry my eyes out,” he said, before adding, “But I will know in my core that the best thing for me and the best thing for us as a family is to put down some roots in London, and it feels absolutely right in every single way.”

Corden announced his departure from “The Late Late Show” last April, sharing that he’ll be exiting the CBS program before summer 2023, per Deadline at the time.

“It’s been it’s a really hard decision to leave because I’m so immensely proud of the show. I’m thrilled to be extending [for a year],” he told the publication in a statement. “I always thought I’d do it for five years and then leave and then I stayed on. I’ve really been thinking about it for a long time, thinking whether there might be one more adventure.”

Corden’s first episode of “The Late Late Show” premiered in March 2015. His final episode has yet to be announced.