“We try and really do things that the fans gonna be happy about … except killing Michael Myers, they’re going to be upset about that.”

“Halloween Ends” this year … or at least the reboot trilogy featuring Jamie Lee Curtis’ return as Laurie Strode does … and producer Jason Blum says working on the films has been a mix of fun and serious pressure.

Blumhouse took over the franchise in 2018, with David Gordon Green rebooting the series by bringing back Curtis and the already-killed-off Laurie, while disregarding every installment after the 1978 original. The movie was a massive success, breaking box office records. Its sequel, “Halloween Kills” also killed it at the box office, while simultaneously dropping on Peacock during the pandemic in 2021 … while the grand finale, “Halloween Ends,” drops October 14, 2022.

The movies have been brutal and, at times, divisive, while also including some callbacks to the previous films and cameos from OG stars including Kyle Richards, Nancy Stephens and Charles Cyphers … as well as a new version of Tommy Doyle played by Anthony Michael Hall.

“The fans are instrumental,” Blum told TooFab at opening night of Universal Studios Hollywood’s Halloween Horror Nights, as he talked about how people like Richards returned to the fold. 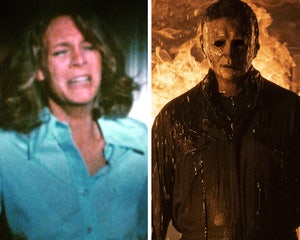 “We have this great production executive, Ryan Turek, who’s our mainline to the fans. So every time we do something creative with the script, we go to Ryan like, ‘Is this okay?'” Blum continued. “He’s not right all the time, but he’s a good voice for the fans.”

“Sometimes we do what the fans won’t like but I like to think if we’re going to do something the fans don’t like, that we know in advance, we’re doing it consciously,” he continued — before joking, “We try and really do things that the fans gonna be happy about … except killing Michael Myers, they’re going to be upset about that.”

With a laugh, he added, “Everyone’s gotta die. He’s exhausted, he’s killed a lot of people. 40 years, give the guy a break for Christ’’ sake!”

As for the chance to take over the franchise and give it a new, proper ending (for now at least), Blum said “it was great, it was really fun” overall.

“It was really fun to do the Halloween movies, a lot of pressure,” he added. “A lot of people have expectations, people are emotionally connected to these movies, so it was a lot of fun.”

He also clearly loved collaborating with John Carpenter, who directed the original movie and returned as a consultant for the new trilogy — adding, “I love how grumpy John is, there’s no one better!”