“He just chopped it all off. And that’s how it happened and I had no say in it,” Aniston said of her infamous Friends ‘do

Could this prank be any more epic?

As shown in two segments that aired during Derek Blasberg’s global beauty summit BeautyFest, which was streamed on YouTube on Thursday, Jennifer Aniston gave two special fans the surprise of their lives.

The “Friends” alum was joined by comedian Benito Skinner (AKA Benny Drama) as they pulled an epic prank on two female fans, who initially believed they were going to get their haircut by Aniston’s longtime hairstylist Chris McMillan.

However, that’s not what happened — well, at least not at first.

In the first segment, which began around 24:40 in the livestream, Aniston — who was rocking a dress famously worn by Courteney Cox on “Friends” — broke down the prank, explaining how the two young girls were expecting McMillan, but they were actually going to be getting Jenny, “The TMI Hair Stylist,” played by Skinner, who walked out in drag — complete with a bright coral-colored wig, hot pink-and-purple tie-dyed pants, and a white t-shirt that read: “Save Your Drama For Your Mama.” (As “Friends” fans know, Aniston wore the same top in an episode of “Friends.”)

After Skinner was introduced, the prank — titled “the Jen(ny) Surprise” — was in motion as Skinner told the two fans that he would be doing their hair, rather than McMillan. Skinner — whose role was as the gum-chewing, “blabbermouth[ed]” hairstylist was absolutely hilarious — took the ladies to the sinks to get their hair washed.

The two fans shared their zodiac signs — Taurus and Cancer — before Skinner said that he likes to do “a little meditation” after washing hair. He then put black towels over the girls’ eyes so they were blindfolded.

Aniston peeked her head into the room — and the first segment ended. The second segment, which was shown at the conclusion of the BeautyFest, picked up right where the first one left off.

As Skinner continued taking the two girls through the meditation, Aniston swapped places with him, with each of her hands on the towels covering the girls’ eyes.

“I have this incredible, incredible party trick, where I do, like, impressions of people, and I have this, like, phenomenal Jen Aniston impression, do you guys want to hear it?” Skinner asked, before counting down from three. Aniston then said, “Oh my god, hi,” and she and Skinner removed the towels from the fans’ faces.

After seeing the star, the girls started freaking out and crying in shock.

“No, no, no! This is exciting I really do hair well. I do hair well,” Aniston said, reassuring the fans. “Did you expect to have this happening on a Sunday?”

Aniston and Skinner took “The Taurus” and “The Cancer” into salon chairs to get their hair done, with the actress proceeding to “shameless[ly] plug” some of her LolaVie haircare, including the detangler, hair oil and leave-in conditioner.

“This is the detangler, first thing we created, spent the most time [developing] this one,” Aniston said. “Depending on how thick your hair is, see I would just do [two sprays]. See how easily it [combs] through?”

Skinner then asked Aniston to recall “the story of ‘The Rachel'” — the infamous hairstyle, which was named, of course, after Aniston’s character from “Friends,” Rachel Green. The Emmy winner rocked the ‘do in the first few seasons of the sitcom.

“You mean the nightmare of the Rachel?” Aniston joked in reply to Skinner, before sharing the story. “Chris [McMillan] came in. I was 20 minutes old and I walked in and he was basically like, ‘Ugh, sit in the chair.’ So I sat in the chair and he went, ‘This is a disaster.’ And then he just chopped it all off. And that’s how it happened and I had no say in it.'”

After telling the tale, Aniston seemingly began to cut “The Cancer’s” hair, but then noted that she and Skinner needed “a little more help.”

McMillan — who appeared to have been watching the entire prank gown down — entered, joking that the salon has a “restraining order” against Jenny (Skinner).

After McMillan took over, both fans ultimately left with some amazing, new looks: “The Cancer” chopped off her black-and-bleach blonde hair into a chic, A-line bob, while “The Taurus” got some stunning, curtain bangs — a suggestion from Aniston herself.

“I kind of blacked out. I don’t think I’ve ever been so starstruck,” “The Taurus” later told the camera. “It was the best day of our lives and I can’t wait to tell all my friends about it.” 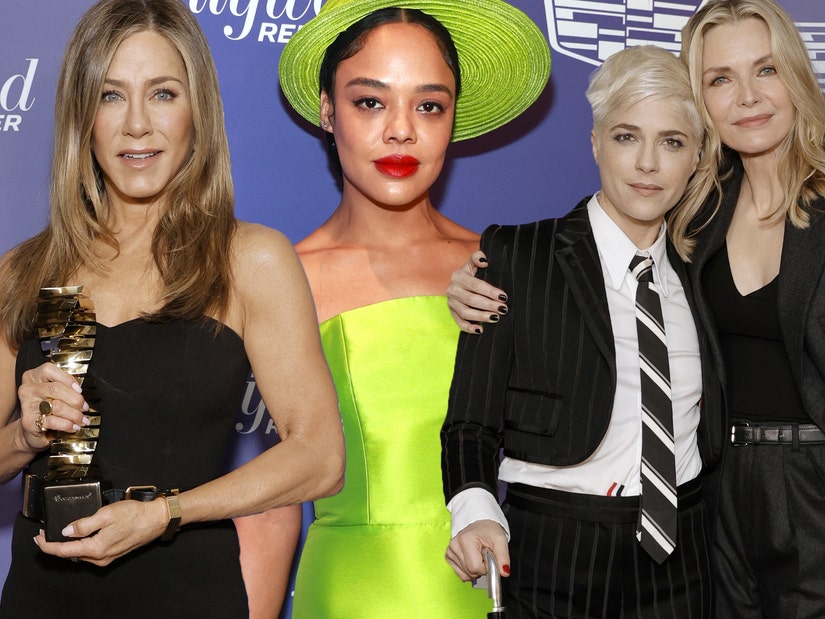