“Look, if I got up onstage and farted, and that’s all I did, it would still be the lady from the movie!”

Jennifer Coolidge has revealed that she was once asked to audition to reprise her “Legally Blonde” role as Paulette Bonafonté in the musical adaptation of the 2001 film.

In a new interview with Variety, the actress recalled how she was shocked that she wasn’t given a “straight offer” to play Paulette in a 2011 West End production of the “Legally Blonde” musical. 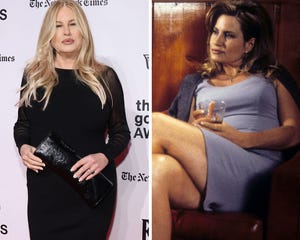 “I said to my agent, what do you mean, audition? It’s not a straight offer?” Coolidge, 60, said, adding that her agent again asked if she’d be interested in traveling to London to audition.

“My agent said, ‘I think they just want to see if you can sing and dance,'” she recalled to Variety. “Look, if I got up onstage and farted, and that’s all I did, it would still be the lady from the movie!”

Coolidge later added, “I’m still angry about this that’s why I brought it up!” Variety also revealed that she’s not represented by the same agent anymore.

The original Broadway cast of the “Legally Blonde musical featured Orfeh as Paulette. The show ran on Broadway from 2007 to 2008 before going on a North American tour. The production was later taken overseas and ran from 2010 to 2012 at the West End in London. In 2011, the first UK tour began. In the original London production, Jill Halfpenny played Paulette, while Liz McClarnon and later, Claire Sweeney, portrayed the character during the UK tour.

Not much is known about the highly-anticipated third installment, “Legally Blonde 3,” which is written by Mindy Kaling and Dan Goor. However, while appearing on “Watch What Happens Live with Andy Cohen” last year, Kaling shared a few small details, including confirming that Coolidge will “1,000 percent” be in the film.

Meanwhile, in her interview with Variety, Coolidge said she knows “not a drop of information” about “Legally Blonde 3,” but expressed her excitement while appearing on SiriusXM’s “The Jess Cagle Show” earlier this week.

“I’m very excited,” she said. “I get thousands and thousands of texts and videos of people doing the Fourth of July [scene], you know, everybody.”

“Men, women, these TikTokers, and then lots of drag queens send me these funny videos and do these weird things with the vegan hot dogs,” Coolidge added, referring to her infamous line in “Legally Blonde 2,” in which Paulette said Reese Witherspoon’s Elle Woods’ Fourth of July-esque outfit made her “want a hot dog real bad.” The quote, of course, is a very popular meme, especially on Independence Day.

“I feel like if we did a ‘Legally Blonde 3,’ I would have something else. It could be maybe some other holiday we could take advantage of,” Coolidge told Cagle. “I really felt like this year, I was like, okay, alright. I’ve really done this Fourth of July thing and I’m gonna have to insist to Reese that we make it this year because I’m not gonna make it. I’m not gonna, I can’t do it. I can’t do it next year. I can’t. You know what I mean? I need new material.”