Aniston’s ex was one in a sea of stars who commented on the knockout spread.

They may not be together anymore, but Jennifer Aniston’s ex-husband Justin Theroux is still one of her many celebrity cheerleaders.

On Wednesday, the actress shared a pair of sexy photos from her Allure cover story to Instagram, in which she was seen in an Aisling Camps dress that showed off a lot of skin as she looked into camera.

“End of an era. Thank you @allure for making me the cover girl of your very last print issue,” she captioned the pictures.

One of the first to comment on the post was Theroux, who responded with “👊 ❤” His simple reaction has since garnered 2,450 likes … while Aniston’s photos have racked up more than 5 million likes of their own.

A ton of Jen’s other celeb friends also commented on the sizzling spread, including Sara Foster who hilariously wrote, “Someone should check on your ex’s today.” Gwyneth Paltrow also added, “This is epic.”

“What a way to go out Allure. Great cover!” wrote Rita Wilson, while Mindy Kaling added, “Are you kidding me.” Octavia Spencer reacted with a ton of fire emojis, while Matt Bomer left a string of hearts and heart eyes.

“Simply. Beautiful. On the outside too,” added Cheyenne Jackson, while Mandy Moore simply wrote “Wow!! Kate Hudson, meanwhile, called Aniston a “smoke show,” Kerry Washington said she was “Stunning!” and Jenna Dewan wrote, “I am deceased!” 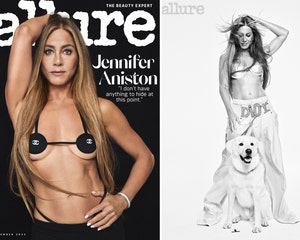 In the interview itself, Aniston did briefly mention Theroux when talking about how she redecorated the home they once shared after the divorce. Showing off her “Babe Cave,” which was once Justin’s office, she added, “You can imagine he likes things black and dark. I lightened it up, stripped it all. He came over [the other day] and was like, ‘What the f— did you do?’ I said, ‘I brought the light back in, buddy.'”

She also opened up for the very first time about trying IVF while trying to get pregnant, speaking out against nasty gossip that her not wanting children was what led to her divorce from Brad Pitt.

Calling out the “narrative that I was just selfish” and “just cared about my career” instead of having a family, she said, “God forbid a woman is successful and doesn’t have a child.” She then honed in on one particular nasty rumor — that “the reason my husband left me, why we broke up and ended our marriage, was because I wouldn’t give him a kid.”

Of that, she said, “It was absolute lies. I don’t have anything to hide at this point.” 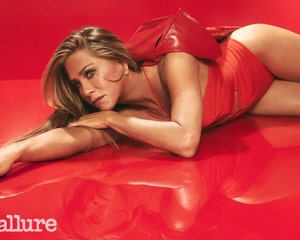 Why Jennifer Aniston Doesn’t Have ‘Any Interest’ In Marrying Again