Appearing on Wednesday’s “The Late Late Show with James Corden“, the reality star went deep on where she might find love going forward post-divorce from Kanye West and her recent breakup from funnyman Pete Davidson.

Corden kicked it off by asking, “Do you get set up by friends? Do you go on a dating app?”

“How does Kim K. get a date?” he further probed.

“I haven’t really thought about it, because I just … I’m not looking,” Kim said at first. “I just want to chill for a minute. I think I need some time to myself and to focus, finish school, all that.”

However she did acknowledge something had to change about her aproach.

“But I think my next route will … I feel like I have to do something, like go to different places,” she said.

“Clearly it’s not working, whatever I’m doing,” Kim admitted. “So I don’t know. Maybe, like, a hospital and meet a doctor. A law firm…” 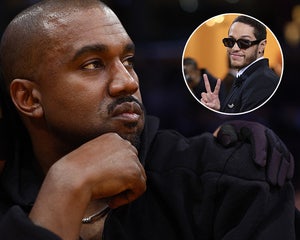 Kanye West Says Pete Davidson Was ‘Pawn’ Sent to ‘Antagonize’ Him, Cost Him His Children

After dating a string of famous men in the entertainment industry, the star doubled down on potentially pursuing more normal — albeit intellectual — men going forward. Which might make sense, as Kim is currently studying to become a lawyer.

“I think it’s gonna be, like, scientist, neuroscientist, biochemist, doctor, attorney,” she told Corden, “that’s maybe what I envision in the future.”

“I like where your mind’s at here,” the late night host agreed. “So if we ever see, like, paparazzi shots of, like, ‘Kim Kardashian spotted at NASA,’ we’ll be like, ‘Ahhhh, she’s back at it.'”