King Charles III is saying farewell to the Queen, his mother.

The new king had a handwritten note along with flowers placed on Queen Elizabeth II‘s coffin during the state funeral at Westminster Abbey on Monday in London. 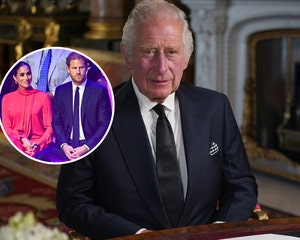 Charles chose flowers to adorn the wreath from three royal residences, while the note, written on royal letterhead, read, “In loving and devoted memory, Charles R.”

The “R” comes from the Latin “Rex” which means “King.” It is a tradition for the English monarch to include “R” in their signature since the 12th century.

The Queen wrote a similar note for Prince Philip at his funeral in 2021.

During the service on Monday, Charles was visibly emotional and appeared to fight back tears.

Funeral services will continue throughout the day on Monday. We will update our coverage as the day progresses.