Winkelmann’s indifference to heritage-inspired one-offs and limited editions is well documented. At the unveiling of the Countach last year, shortly after beginning his second term at the helm of Lamborghini, he told Autocar: “I left the company with the idea that we were never going to make a retro car, never ever. So I came back and said: ‘Why are we doing this now?’ But when we looked at the car and talked about it, I was happy to do it.”

The Sterrato (Italian for ‘dirt road’) was first revealed in concept form in 2019 as a more rugged version of the Lamborghini Huracán Evo. At the time, a Lamborghini spokesman said that despite at least one functioning car having been built, there were no plans to put the model into production. However, one-off cars and concepts aren’t traditionally subjected to winter testing, suggesting that such a car could be headed to dealerships.

Visually, the Sterrato has a far higher ground clearance than the Huracán. It has been fitted with an air intake on the roof, as well as a set of roof rails. The front bumper has also been reinforced with a stone guard, while an LED light bar is fitted to the bonnet. It doesn’t yet feature the concept’s extended wheel arches, which Lamborghini previously hinted could be 3D-printed were the car to enter production. 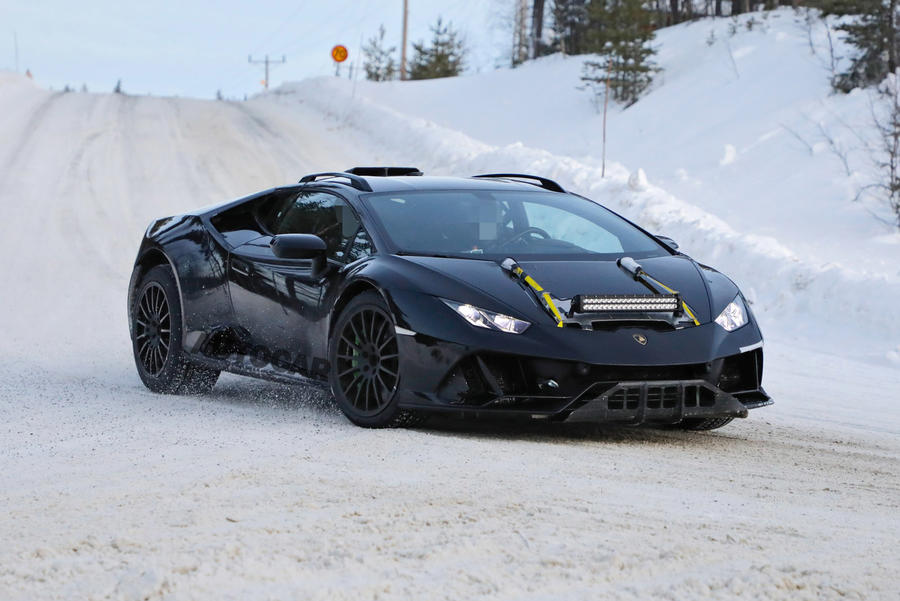 The Sterrato concept was powered by the same 5.2-litre naturally aspirated V10 as the Huracán Evo, producing 631bhp and sending power to both axles via a seven-speed automatic gearbox. It’s expected that a customer version of the Sterrato would retain the Huracán’s rear-wheel-steering set-up but gain an adapted version of the Lamborghini Dinamica Veicolo Integrata (LDVI) driving mode system that’s more effective at finding grip on low-traction surfaces.