Lamborghini has revealed the production-ready Huracán Sterrato, an offroad-ready swansong for its V10 supercar, ahead of the arrival of a new plug-in hybrid successor in 2024.

The final Sterrato has made its debut just two weeks after Porsche’s similarly conceived Porsche 911 Dakar headlined at the Los Angeles motor show, but it is in effect an evolution of a concept first shown in 2019.

Reaction from potential customers was overwhelmingly positive, but company insiders say it took the return of Stephan Winkelmann to the role of Lamborghini CEO in 2020 for the production version to get the green light.

The finished Sterrato, which is due with customers next year, looks very similar to the original concept, with carbonfibre bodywork extensions, a raised ride height, integrated auxiliary driving lights and roof bars, but numerous small tweaks have been made to prepare it for production. The most obvious is the arrival of a roof-mounted air intake for the V10 engine. This is not to enable wading but to find cleaner air in the dusty off-road environments for which the car is designed. 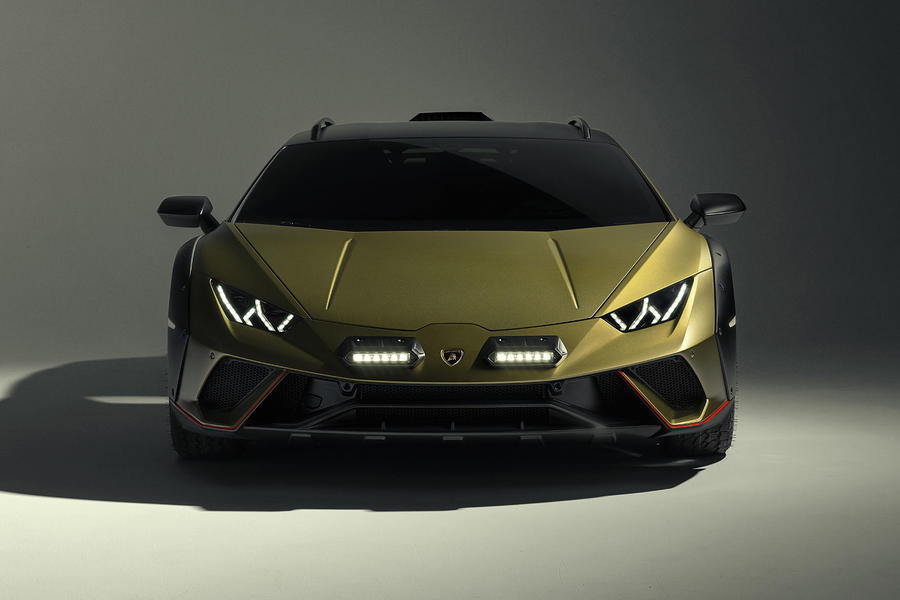 Lamborghini’s engineers also experimented with keeping the original intakes behind the rear side window, with small protection plates to help deflect flying stones. Ultimately, these were not judged effective enough for the production version, hence the switch to a ‘snorkel’ instead.

The revised intake system is the main reason that power from the naturally aspirated 5.2-litre engine has fallen slightly compared with other Huracán models: the Sterrato’s V10 makes 601bhp (compared with 632bhp for the new Tecnica), although the 413lb ft torque peak is unchanged. That results in a claimed 0-62mph time of 3.4sec, this while running on the standard Bridgestone Dueller All-Terrain 002 tyres. The chunkier rubber is also why top speed has been limited to 160mph, which is lowest top speed of any Lamborghini since the monstrous LM002 off-roader went out of production.

The Sterrato uses the same seven-speed dual-clutch automatic gearbox and allwheel drive system as the Evo AWD, but it does without the powered rear-axle steering that it had as standard. “On dirt, there isn’t any point,” said Rouven Mohr, Lamborghini’s CTO. Mohr also confirmed that the Sterrato has a Rally mode, like that on the new Urus Performante. This doesn’t disengage drive to the front axle but slackens off stability control intervention to allow both large and sustainable oversteer angles, though it will step in if the car starts to spin.