There is a delicious irony about our first drive in the Lamborghini Urus S happening in Qatar. In the wealthiest country per capita in the world, Qataris aren’t actually that interested in the S, the new ‘base’ version of the Lamborghini Urus. They’re all about the Urus Performante. Because if you’re going to buy a family car (and that’s what it is out here, even with the S’s £188,000 starting price), thenyou might as well get the top one.

Overall, Qataris have embraced the Urus with gusto, earning it a healthy market share. And offering a more powerful starting point into the Urus range will hardly hurt Lamborghini. What’s staggering isthat even these punchier versions don’t cannibalise sales off the Huracán and Aventador supersports cars. The SUV is simply an additional purchase, such is the rarefied world of the Middle East.

The Urus S gets a reworked version of the bi-turbo V8 that appears in everything from the Bentley Bentayga to Porsche Cayenne, this time producing an additional 16bhp to take it to 657bhp and 627lb ft. Don’t tell the locals, but that’s actually exactly the same power as the Performante.

There’s a retuned exhaust and some front and rear styling tweaks. The S also has a matt black stainless steel front skid plate, designed to match the grille, and a carbonfibre bonnet with optional body-coloured or carbon vent surrounds. (Plain black is standard.) Again, whisper it to the locals: the Performante has a carbonfibre bonnet. At the rear, the bumper has been tweaked, with more matt black parts lower down and a new exhaust tip design.

More personalisation options are now available and Lamborghini is heavily pushing its Ad Personum programme, where most of the world’s colour palette is open to customers. Inside, there’s a newstitching pattern with fresh leather colour options, while drivers can choose from Bi-colour Sportivo or Bi-colour Sophisticated seats.

In the least surprising news of 2022, given the power upgrade, the Urus S is a mighty fast car, to the point where no 2.2-tonne machine really has any right to be. And yet the impressive thing is how benign it can feel. No Lamborghini is subtle but it’s not tricky to thread it gently through a city centre. 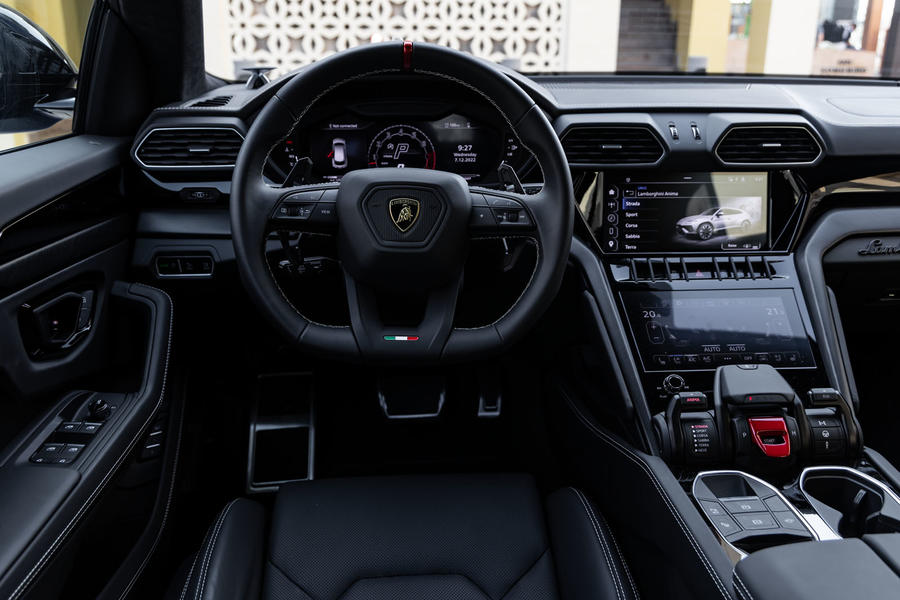