Land Rover is so sure you will use the rear seats for carrying stuff rather than people if you opt for the Country Pack that it installs a heavy metal divider behind the front seats, which I’ve now had to remove as a result of having children. Access to those rear seats is hard, requiring you to haul yourself up, shuffle round and then, if nobody is in the front passenger seat, thrust yourself a body length forward to be able to heave the vast door shut.

And, while highlighting that room up front and in the back is generous, there’s also the fact that these compromises are packed in a car 4.5m long with the spare tyre (already used) considered, 2m wide, of a length that makes it hard to park anywhere and of a height that makes entering many car parks a hazard.

And yet… after a week of thinking the world had gone barking mad and I would never be able to live with it, something clicked. One moment my brain was awash with negatives (a list you could add to with the age-old Land Rover characteristic of hesitant step-off and slightly vague steering, perhaps not helped by the knobbly tyres), the next I was pondering how I could ever live without it.

I’ve experienced this before, including with a Range Rover, and it’s easy to explain but hard to fathom. These are cars that just click; suddenly you know your way round it, know and anticipate its foibles; and then, just like that, your right elbow is resting on the door frame, you’re steering with one hand and you would be devastated if it were taken away. 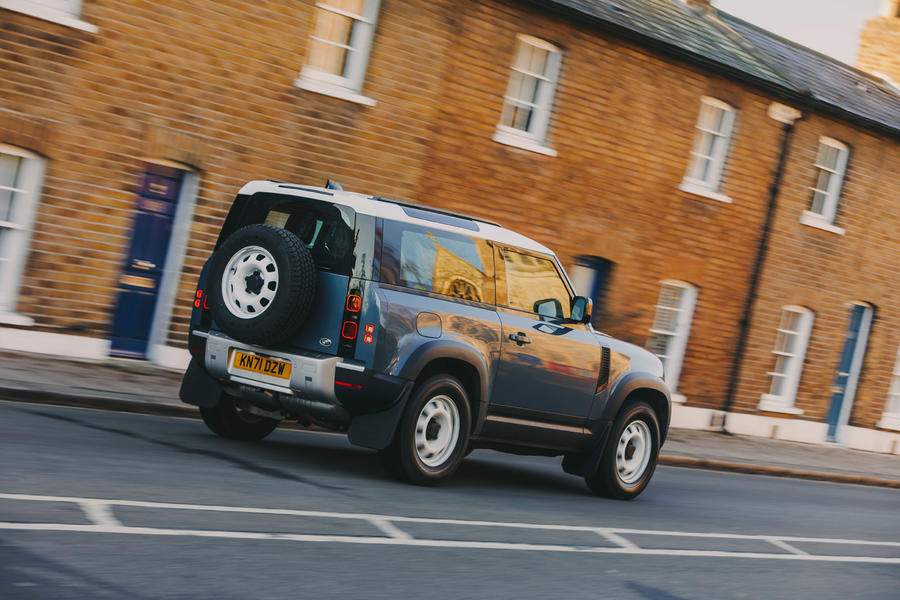 Hold the five-door 110 solution. Even the kids, pectorals now built up from all the steps and lunges they’ve been doing, are hopping in with relative ease, if still needing to be caught on the way out.

Where does this leave me? Maybe it should be no surprise, given that the world’s most famous utility vehicle has morphed into one of the most fashionable, that I’m wondering if this love affair, compromised and contradictory though it is in part, will continue to flourish in town, on the motorway and off road. For this money, I want a car that can win my heart and mind – and there’s plenty more hurdles it will have to overcome in the coming months to do that.