“It’s about damn time they call me,” the three-time Grammy winner said of Kravis.

There are likely many people who aren’t huge fans of Kourtney Kardashian and Travis Barker’s now-infamous public displays of affection — however, Lizzo is totally here for it.

While appearing on Monday night’s episode of “Watch What Happens Live,” the 34-year-old singer played a game titled, “About Damn Time or Don’t Waste My Time,” a nod to her chart-topper “About Damn Time.”

During the game, Lizzo was asked to weigh in on a few pop-culture headlines, and shared whether or not she gives her stamp of approval.

And, at one point, host Andy Cohen asked the three-time Grammy winner her thoughts on Kravis’ “pervasive PDA.”

Without hesitation, Lizzo said, “Ooh, let me get in the middle of that,” before adding, “I sat with them at the Met Gala and I fully enjoyed it.”

“So it’s about damn time they call me,” Lizzo said, laughing.

Kourtney, 43, and Travis, 46, began dating in early 2021, and it didn’t take long for them to become known for packing on some serious — and rather excessive — PDA. 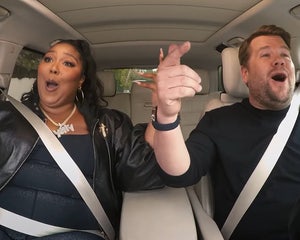 The couple became engaged in October 2021, and went on have three different wedding ceremonies. The Blink-182 drummer and POOSH founder first exchanged their vows via Elvis impersonator in an unofficial ceremony in a Las Vegas chapel after the Grammy Awards in April. Kourtney and Travis later made things legal when they tied the knot at a Santa Barbara courthouse in mid-May.

The pair then said “I do” for the third time at L’Olivetta, a villa owned by Dolce & Gabbana in Portofino, Italy in late May with their closest friends and family.

Meanwhile, also during Lizzo’s appearance on “WWHL,” she gave Andy a little dance lesson, but not just any dance lesson: the “Truth Hurts” singer taught the Bravo star how to twerk.

Lizzo first checked out what Andy was working with, describing his behind as a “donkey,” before then noting that it’s more “like a small horse.”

The Emmy-nominee then demonstrated how to do the basic “up and down” twerk. “A lot of people think twerking is this, popping, it’s not. It’s about the leverage … it’s the isolation,” Lizzo said as she showed the dance move, and Andy attempted to follow along.

While we can’t see Andy joining Lizzo and the Big Grrrls on stage anytime soon, he definitely deserved an A+ for effort.

See more in the full clip, above!