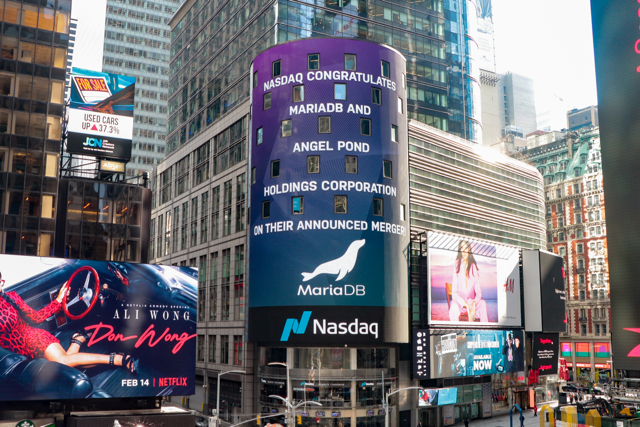 Following through on an announcement it made in February, database management system provider MariaDB plc went public today on the New York Stock Exchange through a merger with Angel Pond Holdings Corp.

Ordinary shares and warrants began trading under the symbols “MRDB” and “MRDB WS,” respectively. The combined firms are an Irish public limited company renamed MariaDB plc. with headquarters in Redwood City, California, and Dublin, Ireland. No management changes are planned, the company said.

Shares started trading today at $11.55. As of 11:15 a.m. EST they were down more than 27%, to $8, after falling as low as $5.98 in early trading. The company’s market capitalization was $368 million at today’s opening price, well below the $672 million valuation that was estimated in February. MariaDB said it ended fiscal 2022 with over $50 million in annual recurring revenue and has more than 600 customers in more than 60 countries.

The IPO was facilitated by a transaction known as a special-purpose acquisition company in which a publicly held shell company is formed for the purpose of acquiring another company and taking it public. The business has no operations but sells shares to investors who want to buy into the acquired firm.

SPACs had been soaring in popularity as a faster and less risky alternative to conventional initial public offerings. But SPAC activity has slowed this year amid a broad market downturn after raising nearly $162 billion in 2021.

MariaDB sells an enterprise version of the open-source DBMS by the same name. It also has a managed cloud database offering called SkySQL.