How highly you rate the new Mercedes EQE is likely to depend on what it is that you want from your mid-ranking Benz saloon.

Traditionally, the role has  been well defined and played dependably well by the Mercedes E-Class. The hallmarks are space, comfort and best-in-class isolation, all in an elegant but understated design and one with handling that, if not outright engaging, feels quietly thoroughbred. All in, a class act.

So to the EQE, which in terms of both style and technology is much the shrunk-down Mercedes EQS, and is tested here for the first time on British roads. What is there for the E-Class owner who wants to go electric?

Probably not an overwhelming sense of value for money. The entry- level, rear-driven EQE 300 offers roughly the same performance  as the E200 but in like-for-like  trim costs almost £30,000 more than its £45,000 petrol-engined peer. Mercedes claims the EQE  and E-Class achieve similar profit margins, and it’s not hard to see why. 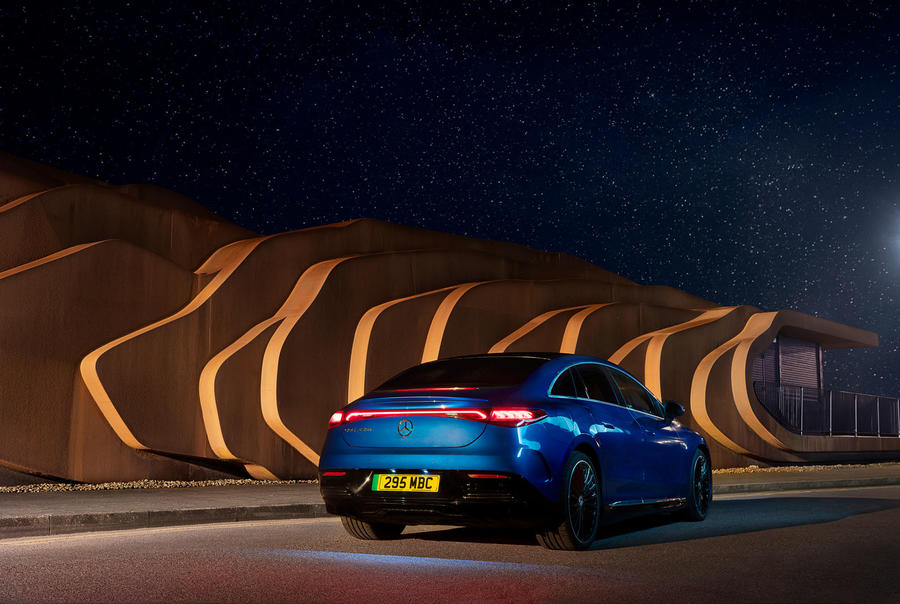 Then there’s the aesthetic. I can speak for only myself here, but Mercedes’ differentiation of its electric saloons from the ICE status quo has resulted in something a little formless. It probably won’t surprise you to know that the EQE is shorter, wider and taller than the loping E-Class. Sure, the nose is smart enough and the rear diffuser is purposeful, but altogether the car lacks personality, much like the very similar but slightly slipperier EQS.

The EQE starts to make its case as you drive it, but only in specific ways.

The big positive is ride quality, which for our EQE 350+ AMG Line test car, on 21in wheels, is fabulously serene. The suspension is modelled on that of the S-Class, with air springs all round, and it shows. Apart from the sharp shocks that few if any pneumatic systems deal with well, the EQE cruises down even rougher roads unperturbed and ghosts along motorways in restorative fashion. Speed bumps are insouciantly dispatched and no E-Class owner could ever complain about isolation. It’s church-quiet in here.

However, E-Classists might like a more pedigree (that is, lower and more supportive) driving position and a more substantial glasshouse. Because of its underfloor battery, the EQE often feels crossover-like from behind the wheel, and having an extremely high scuttle is never quite enough to disguise this.

Equally, the drawback of the towering windowlines and chunky false transmission tunnel is that the windows and windscreen look short and the cabin feels pokey, especially in the back, where occupants don’t benefit from the EQE’s shapely and lavish dashboard, which brings a GT-style ambience. Factor in the modest boot and the E-Class is not only a nicer place to sit for all but also more practical.

That said, I can see the appeal  of the EQE for people who want  to feel they’re ensconced within some high-tech fortress on wheels, sealed off from the dim and the grit of the outside world. Maybe too sealed off, mind – rearward visibility is surprisingly poor. In fact, even the new Ferrari 296 GTB does better in this respect, and for something as large and heavy as the EQE, that simply isn’t good enough.