The Mercedes-Benz EQE has been praised by safety testers as “excellent”, especially its new semi-autonomous emergency stop system, as part of the latest round of Euro NCAP ratings.

The £73,450 saloon, the latest from the German brand’s all-electric EQ range, comes equipped with an Active Emergency Stop Assist function – the first of its kind to be assessed by Euro NCAP – which, if the driver becomes unresponsive, safely manoeuvres the car to the slowest lane before bringing it to a stop.

The team graded this feature as “very good”, making it the highest-scoring car tested for this category.

Overall, the car was given a maximum five-star mark, with the report noting its “excellent all-round performance”. Euro NCAP’s secretary general, Michiel van Ratingen, said: “Fully autonomous driving is still some way away but the groundwork is being laid by robust, high-performing assisted-driving systems like this one from Mercedes.”

The EQE was joined in the top marks pool by eight other cars, including the new BYD Atto 3, which continues the successful run for Chinese brands in Euro NCAP, following similar results for Wey and Ora earlier this year. 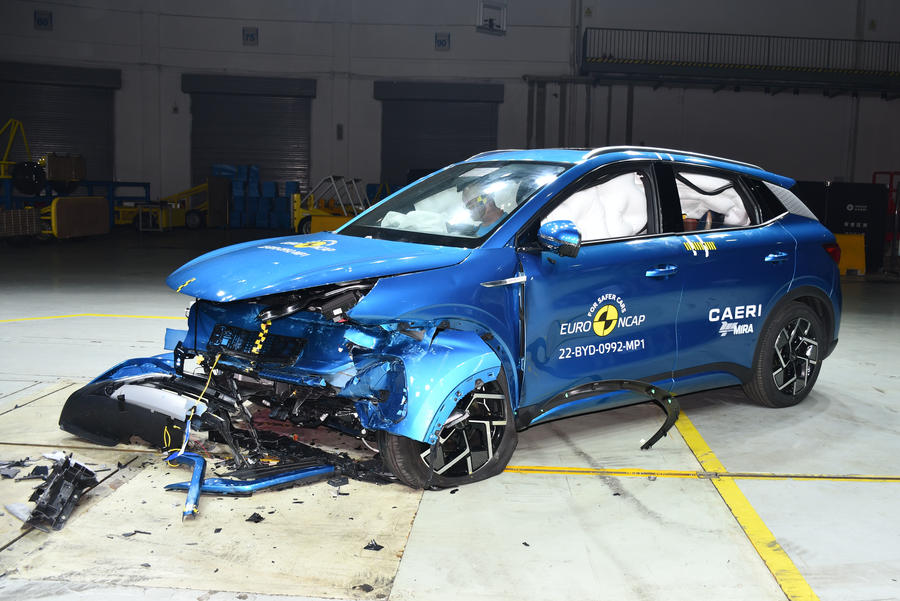 Another car praised by testers was the updated Volkswagen Golf, which, along with a facelifted body and refreshed tech, has received some safety upgrades. These include the addition of a centre airbag, lap pretensioners, junction assist and a fatigue detection system, which all contributed to its new five-star rating.

Van Ratingen was impressed with the Golf. He said: “There is a lot of pressure on car manufacturers to extend the lifetimes of their vehicles, especially those of combustion-engined cars, which will soon be replaced by all-electric models.