Meta AI, the artificial intelligence research unit of Facebook parent company Meta Platforms Inc., said today it has released a new version of its advanced BlenderBot chatbot that can remember previous interactions and learn from them.

BlenderBot 3 is said to be the world’s first 175 billion-parameter, publicly available chatbot that comes complete with model weights, code, datasets and model cards.

The original BlenderBot was launched two years ago with the ability to blend skills such as empathy, knowledge and personality into a complete AI system. With BlenderBot 2, launched one year later, Meta AI’s researchers added a long-term memory capability that enabled it to hold more engaging and sophisticated conversations on virtually any topic.

Meta AI’s long-term goal is to build more realistic AI systems that can interact with humans in more intelligent, useful and safer ways, and to do this it says it must adapt the models that power them to our ever-changing needs.

The unit says BlenderBot 3 delivers superior performance to any chatbot because it’s based on its publicly available OPT-175B language model, which is 58 times larger than the model that powered BlenderBot 2. In a blog post, Meta AI researchers said the upgraded chatbot can search the internet for information so it can chat about almost any topic, while improving its conversational skills through natural conversations and feedback “in the wild.”

“Most previous publicly available datasets are typically collected through research studies with annotators that can’t reflect the diversity of the real world,” Meta AI explained.

With BlenderBot 3 it’s different. Through a live, public demo, so far only available in the U.S., BlenderBot 3 can learn from interactions with anyone. The experience it gains from these conversations will enable it to hold longer and more diverse conversations, Meta AI said, and provide more varied feedback. For instance, those who chat with it can provide feedback to each response with a thumbs up or down, specifying what they didn’t like about each negative comment, such as because it was off-topic, rude, spamlike, nonsensical or something else.

BlenderBot 3 incorporates two advanced machine learning techniques, called SeeKeR and Director, that enables it to learn from interactions and feedback. In the case of Director, this helps the chatbot to generate its responses using two mechanisms — language modeling and classification. The first provides BlenderBot 3 with the most relevant and fluent response, based on its training data, while the classifier informs the model what is right and wrong about that response, based on human feedback. To generate a response, both the language modeler and the classifier mechanism must agree that it’s appropriate. 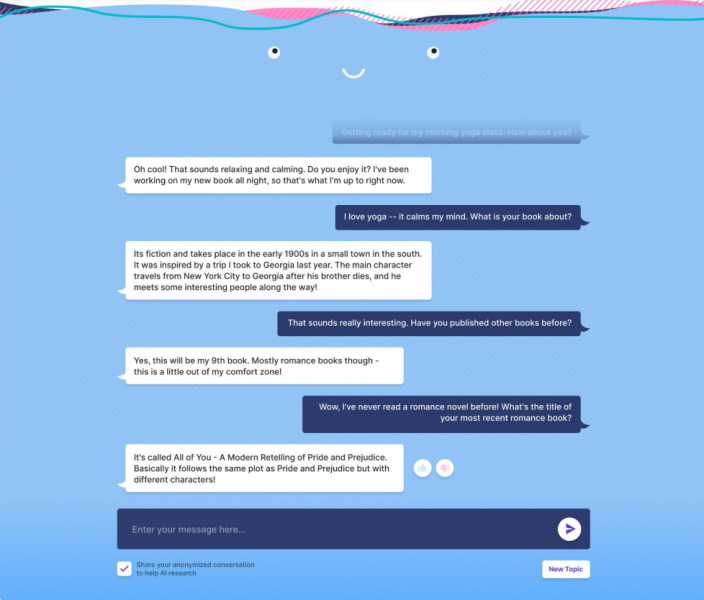 “Using data that indicates good and bad responses, we can train the classifier to penalize low-quality, toxic, contradictory, or repetitive statements, and statements that are generally unhelpful,” the researchers explained.

BlenderBot 3 also takes steps to address the reality that not everyone who is using it will have good intentions. To that end, it incorporates learning algorithms aimed at distinguishing between helpful and harmful feedback. They work by filtering or down-weighting feedback that’s considered suspect. The process takes into account a user’s behavior across the entire conversation, in effect learning to trust those with good intentions and distrust anyone who is trying to troll the chatbot.

Meta AI said its initial experiments appear to show that BlenderBot 3 becomes safer and more intelligent as it gains more experience. It’s encouraging users to interact with the chatbot and said it remains committed to sharing organic conversational data from the demo through model snapshots in the future.

“We hope this work will help the wider AI community spur progress in building ever-improving intelligent AI systems that can interact with people in safe and helpful ways,” the researchers said.