The Cyberster roadster, due on sale before 2024 as an affordable halo car for MG, has been officially previewed by the brand – suggesting an unveiling is finally on the horizon.

In a video posted to social media (below), MG showed off the roadster’s sleek, long-nosed silhouette, electric folding canvas roof, two-tone sports seats and distinctive LED headlights. Other definitive design cues visible at this early stage include a subtle ‘ducktail’ rear spoiler and a rear lighting design modelled on the Union Jack – a nod to MG’s British roots.

Tellingly, MG captioned the video ‘return of the legend’, which strongly suggests the final production car will resurrect a sporting nameplate from the brand’s illustrious past; earlier this year, the brand trademarked the name MG C EV – a name which references a lesser-known, straight-six-powered version of the brand-defining MG B from the late 1960s.

The two-seat electric sports car was previewed as an outlandish concept in 2021, which company bosses said was given the green light for production after receiving more than 5000 expressions of interest from potential buyers.

The official preview and recently filed design patents show just how far the design has come since that concept and indicate that the Cyberster – which will essentially serve as an electric rival to the likes of the Mazda MX-5 – is nearly ready for an official unveiling.

While the production car’s silhouette bears a visual relation to that earlier concept, it’s all change elsewhere, with a total redesign bringing the car into line with MG’s production models and rendering it compliant with global homologation rules. It sits higher than before, for example, the wheels are smaller and wrapped in chunkier tyres, the headlights are now uncovered and the gaping front grille panel has been swapped for what looks to be a subtler, decorative item, perhaps housing an array of sensors.

It still looks to be a two-seater, though features a folding roof rather than sticking with the concept’s open-cockpit arrangement, and the prominent streamliners running from the headrests to the trailing edge of the boot lid are gone. 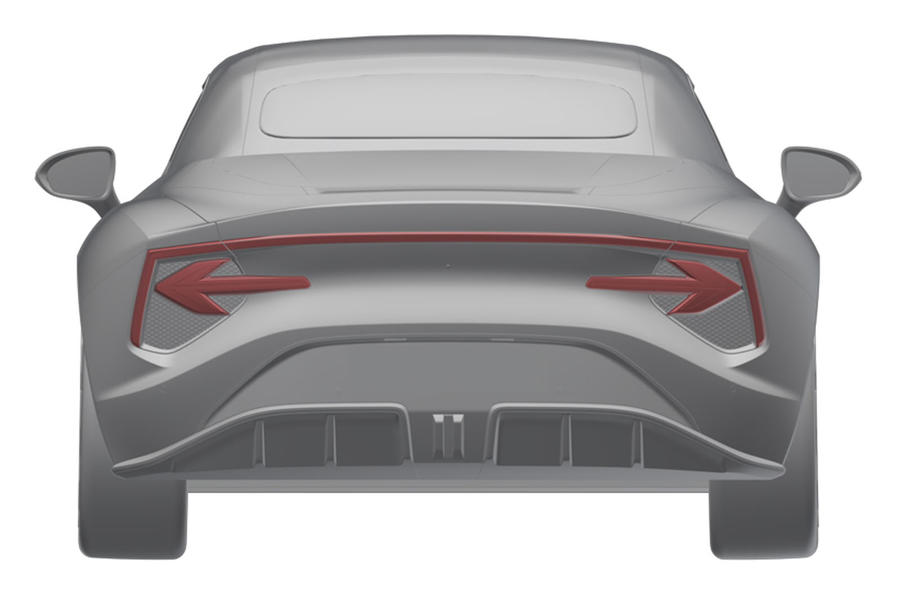 Despite the car appearing more or less undisguised in these renderings, still little is known about its powertrain, pricing or performance potential.

The concept was said to be based on a bespoke EV architecture, offering a range of 497 miles and a 0-62mph time of less than 3.0sec, and as a spearhead for MG’s new youth-focused Cyber brand, the convertible is expected to be priced affordably – potentially even competing with today’s entry-level combustion-powered sports cars.

Talking about adding the Cyberster to the MG line-up, the firm’s UK commercial director Guy Pigounakis recently told Autocar: “The problem with sports cars is that everybody loves them but not many people buy them.” He added, however, that MG’s global volume means it can “afford to invest in sports cars and take a longer-term view on when there will be a return on investment”, adding that having a sports car “will bring us massive PR and marketing benefits”.

The MG 4 hatchback, however, will arrive first, before the end of this year – as the first of a family of EVs based on SAIC’s new Modular Scalable Platform, likely to also be used by the Cyberster. That paves the way for 167bhp and 201bhp rear-wheel-drive powertrains – in keeping with its affordable sporting brief – but also a 443bhp dual-motor range-topping option.

The MG 4 is available with both 51kWh and 64kWh batteries, but packaging constraints and less strenuous range requirements could see the Cyberster sold with only the smaller of the two. Expect a range figure comfortably north of 200 miles, in any case.

A third new MG to arrive by 2024 hasn’t yet been confirmed, but it is likely to be a third SUV, given the continuing consumer demand for high-riding vehicles.