Notepad, Microsoft Corp.’s arguably most underrated app, may soon get an upgrade in Windows 11 after a senior product manager tweeted that the app is about to get tab support.

Simple yet functional at its core, Notepad, known initially as Multi-Tool Notepad made its debut in 1983 as a standalone app before being included in Windows 1.0 in 1985. Every version of Windows since has included Notepad and not much has changed over the years. 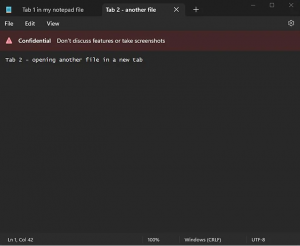 A tweet from an unnamed senior product manager, which was taken down minutes after being posted, stated, “Notepad in Windows 11 now has tabs!” and included the picture to the right. The image shows a tabbed interface that resembles File Explorer, with a bar at the top showing the different tabs and a plus icon to open new ones.

Notably and likely why the tweet was taken down, the image also shows the text “Confidential – Don’t discuss features or take screenshots.”

Whether this is simply an internal test that will never see the light of day is another matter. XDA Developers notes that it is not unusual for Microsoft to “dog food” early builds of apps and services to employees. Combined with the confidentiality warning, this appears to be an early internal build.

The image and the source all point to the test version being real. If released, it could be offered through a simple Windows 11 update, similar to when tabs became available in the Windows 11 version of File Explorer early this year.

There is no guarantee that it will be released as Microsoft has been here before. According to Latestly, Microsoft tried tabs across all Windows 10 apps in a feature called Sets four years ago. Sets included tabs in Notepad and File Explorer, but Microsoft halted the project and it was never released to Windows 10 customers.

Should tabs become available in Notepad, they will be welcomed by users. Currently, the only way to have multiple Notepads open is to open an additional Notepad, an experience similar to using web browsers before they gained tabs in the early to mid-2000s.

That Notepad is nearly 40 years old is a testament to its simplicity. As How-To Geek noted in 2020, Notepad is still “awesome” for taking notes. While there are specialized note-taking apps, Notepad is quick, simple and just works.