Volkswagen has yet to provide dimensions for the long-wheelbase model, although officials suggest it will receive a 250mm-longer wheelbase, providing it with the scope to accommodate up to three rows of seats.

Despite a large frontal area, the drag coefficient is commendably low by commercial vehicle standards, with a Cd of 0.28 for the passenger model and 0.29 for the Cargo.

Inside, there is an ergonomically sound driving position, similar to the Multivan’s, in a largely uniquely styled cabin. The front seats are set 261mm higher than those of the ID 4, promoting enhanced all-round visibility. Armrests are also included in the more highly specified Pro equipment level for a true captain’s chair-like feel.

The high-mounted, minimalist dashboard is uniquely designed and houses both a 5.3in digital instrument display and standard 10.0in infotainment touchscreen – the latter optionally 12.0in. Whereas other ID models use a rocker-style controller mounted high on the end of the instrument display for gear selection, the ID Buzz receives a lever mounted on the steering column. It is also used to control the primary drive modes: D (Drive) and B (Battery).

To help break up the large surfaces, Volkswagen offers a range of different colour schemes, including a two-tone treatment. There is also optional ambient lighting to brighten various elements. 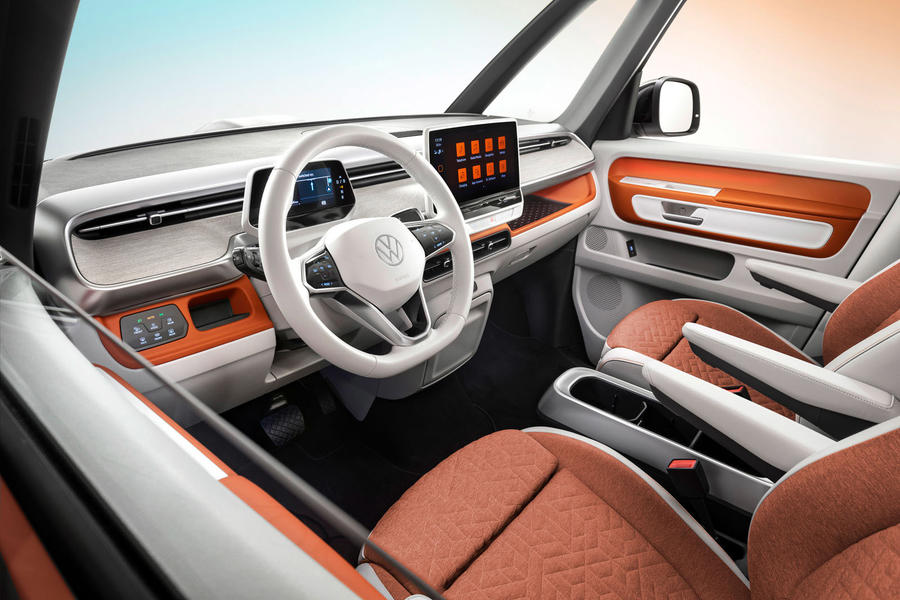 Storage space has also been a priority in the cabin, with a compartment that hinges down from the base of the dashboard to reveal two large drink holders as well as a pod-like centre console, housing both a bottle opener and ice scraper, called the ‘Buzz Box’ between the front seats and door trims featuring large bins.