Set for sale in China by the end of 2023, the electric-powered four-door is set to become the second model in Aion’s newly announced Hyper electric car sub-brand, after the Hyper SSR sportscar unveiled in September.

Pricing is yet to be announced, although Aion officials hint the Hyper GT is set to compete against the likes of the Xpeng P7 and Hozon S with a subsidised price starting at around RMB300,000 (£36,100) in China.

The styling of the new saloon is based around what Aion describes as its “wind and water” design lineage first aired on the Hyper SSR. Smooth surfacing is combined with round forms, heavy tapering and flush door handles to create an aerodynamic exterior.

Further elements include active air ducts within the lower section of the front bumper and an active rear spoiler measuring 1465mm in width.

Aion says the scissor action front doors, which open at an angle of up to 43 degrees and provide a 573mm-wide aperture, will be retained for the definitive Hyper GT production model, which is claimed to possess a drag co-efficient of 0.19.

If verified, this would make it more aerodynamically efficient than the Mercedes-Benz EQS, which boasts an official drag co-efficient of 0.20. It would also better the 0.208 drag co-efficient claimed for the Tesla Model S. 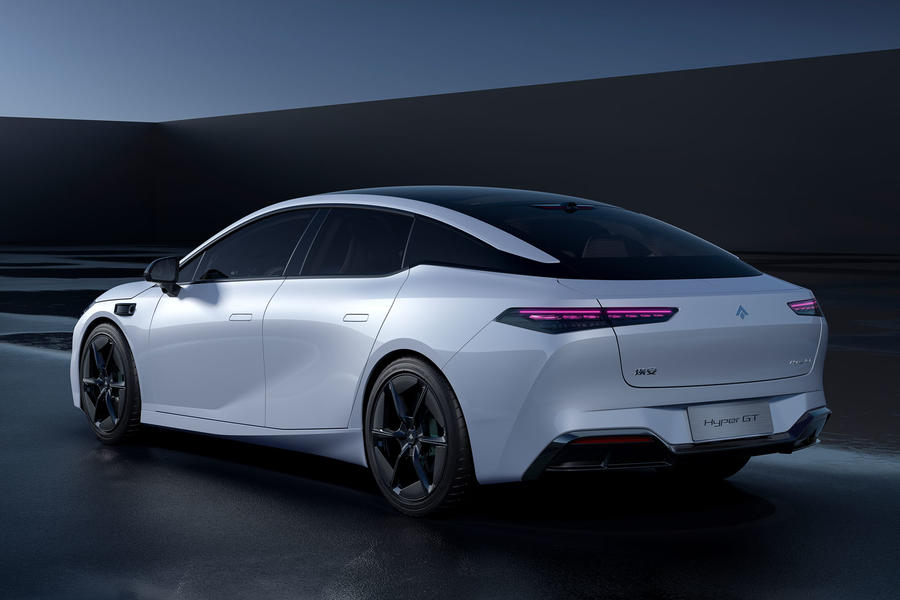 No official dimensions for the new saloon have been announced.

Power for the Hyper GT, which is based on Aion’s new AEP 3.0 electric car platform, comes from a rear-mounted electric motor developing 335bhp and 317lb ft of torque.

Aion claims a 0-62mph time of 4.0sec, but it is holding back on details of the battery and range until closer to the Hyper GT’s Chinese market introduction during the second half of 2023.