The first Ford EV to use Volkswagen’s MEB platform will be revealed in the coming months before replacing the Ford Fiesta at the firm’s Cologne production line around the middle of the year.

The new EV has been kept tightly under wraps since it was confirmed in 2021, but a pair of high-ranking Ford bosses have given the first hints of its design on social media – suggesting a reveal is only a few weeks away.

Martin Sander, head of Ford’s Model E electrification division, lifted the covers off part of the Skoda Enyaq rival’s front end on Twitter, saying: “Can’t wait for 2023 to arrive, when we will pull off the cover of our first electric passenger vehicle coming from Cologne.”

Only a small part of the car is visible, but it is already clear that this new EV will mark a step change in the design of Ford’s European-market cars. As reported by Autocar, Ford’s most successful US-market cars – the Bronco and F-150 most notably – will influence the design of its future global products. 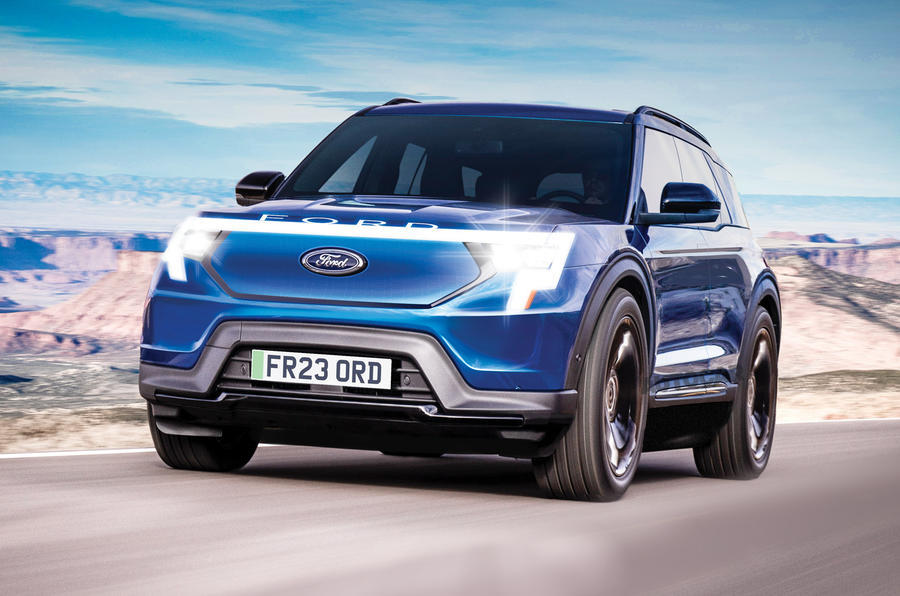 Apart from the new EV’s aero-optimised wheel designs, contrasting lower bumper and chunky headlights, everything remains under wraps, but in size and silhouette, it is evident that Ford’s new EV will be aimed squarely at cars like the Toyota bZ4X, Nissan Ariya and Volvo XC40 Recharge.

Ford’s Europe marketing boss, Peter Zillig, posted a darkened preview image of the car to his LinkedIn, similarly giving little away but revealing a charismatic LED front light signature that could become a defining feature of Ford’s new-era cars.

Zillig said all new Ford models will be designed according to the ‘Adventurous Spirit’ ethos, which is designed to help Ford “connect emotionally with consumers who say they know we’re American, but don’t feel we’re American”.

He said: “Adventurous Spirit is meaningful because it is authentic. We’re not inventing something new. Instead, we’re channelling a strength that has helped define Ford for fast-approaching 120 years. We are tapping into something intangible, but real.”