The new electric i5 Touring, spotted testing by our spy photographers, marks the fifth generation since the full-size estate was launched in 1991. The EV variant will be joined by petrol, diesel and plug-in hybrid variants as well as the saloon bodystyle arriving in 2024.

The new Touring is expected to be available with the usual raft of practicality we’ve come to expect from such a competitive market. While BMW could not comment on boot space and legroom, we suspect the new estate will be a slight improvement on the current car’s 560 litres (with the seats raised) and competitive with the 480 litres on offer in the Mercedes E-Class Estate.

There is little to confirm whether or not the introduction of a full-electric powertrain has affected interior space, but with the new BMW i7 losing 40 litres in boot space over its PHEV cousin, a sacrifice in some practicality is to be expected. 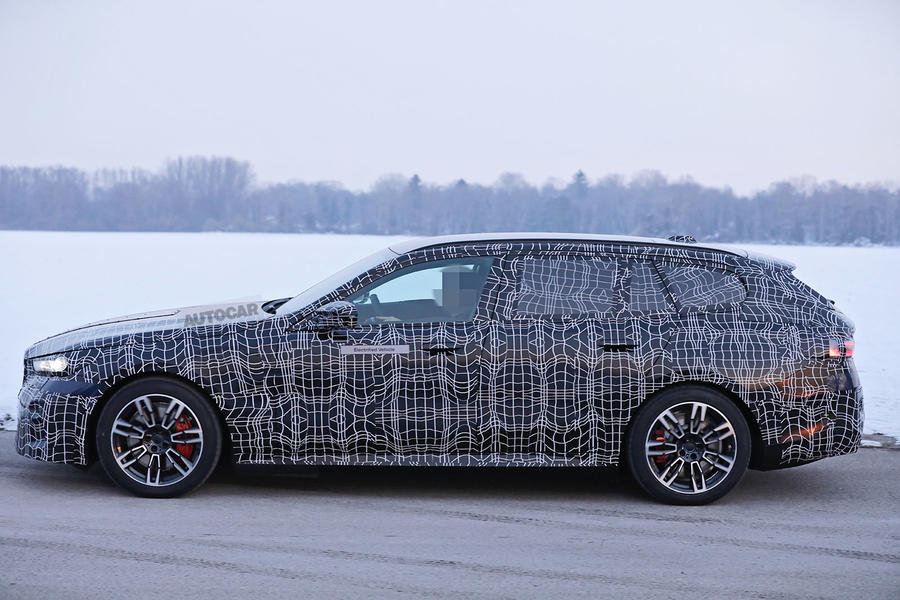 BMW is still to confirm if the 5 Series Touring will share its underpinnings with other models, however the current car shares the same CLAR architecture that underpins the new BMW 4 Series, therefore its larger sibling could offer a similar powertrain line-up if it uses the same platform.

As such, the standard i5 Touring could be offered in rear- and four-wheel drive guise with outputs ranging from 335bhp to 536bhp, the latter essentially creating an all-electric BMW M5 Touring. If it follows the same nomenclature as the BMW i4, we expect e40 and M50 nameplates to be regurgitated for both the 5 Series saloon and Touring editions.

Outside, photographs reveal an updated, sleeker headlamp design and covered kidney grilles which don’t extend beyond the front number plate (ie vertical), as on the current BMW M3 and 4 Series.