Chinese giant BYD will begin selling electric cars in the UK in the coming weeks, following the launch of its first showrooms in the country.

The firm has partnered with Arnold Clark, Lookers, LSH Auto and Pendragon, with an initial run of dealerships slated to launch in “critical regions” by the end of March.

The UK launch represents BYD’s return to the UK, having previously sold the e6 electric crossover in limited volumes – primarily to private-hire fleets.

It is the next step in BYD’s European expansion plans – set into motion last year with launches in Belgium, Denmark, Luxembourg, Sweden, the Netherlands and Norway – coming as the firm targets four million sales in 2023.

Initially, only the BYD Atto 3 will be sold in the UK. The first model to use the firm’s new e-Platform 3.0 architecture, the 201bhp, front-wheel drive crossover is a similar proposition to the MG ZS EV, both in size and performance. The Atto 3 offers a 261-mile range on the WLTP combined cycle, charging at rates of up to 80kW and a 7.3sec 0-62mph time. 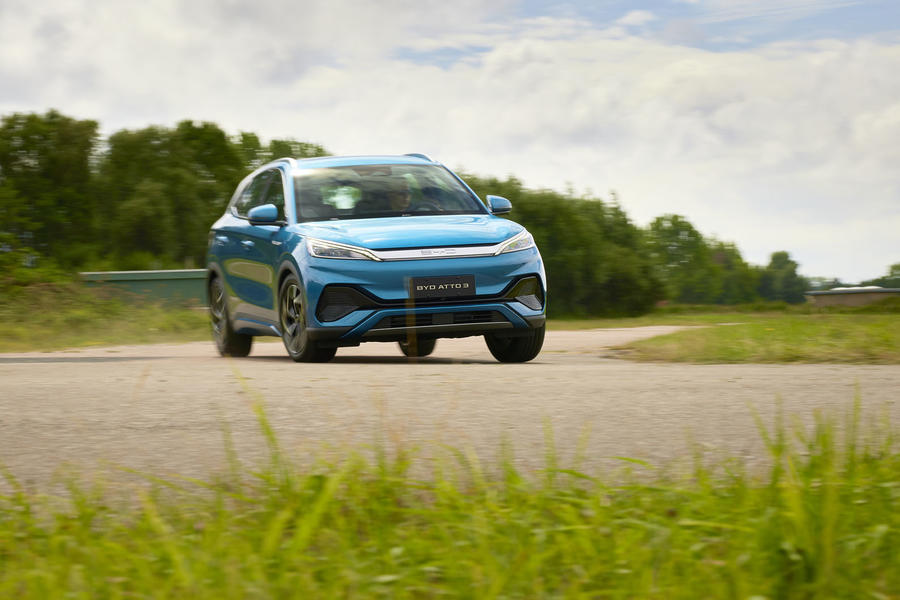 Energy is stored in a 60.5kWh lithium-iron-phosphate battery (containing no cobalt) that BYD calls the Blade. Said to be 50% more energy-dense than a conventional lithium ion unit, the Blade Battery has been developed to “resolve issues in battery safety while also redefining safety standards for the entire industry”.

At the launch of the power pack last year, BYD showed how it could withstand a nail penetration without suffering thermal runaway in the same way as more commonly used battery chemistries, thereby reducing the risk of fire.

BYD has started to offer the battery to other manufacturers including Toyota, which will use it in the Chinese-market bZ3 saloon. BYD will also use the batteries in models from its new luxury brand, Yangwang.

In Europe, the Atto 3 will be sold alongside the BYD Han, a Tesla Model 3-rivalling executive saloon, and the BYD Tang, a seven-seat SUV that has been offered in limited volumes in Norway since July 2021. The latter two are not planned to come to the UK, although the new BYD Seal, a compact Model 3 rival, has not been ruled out.