Mercedes-Benz is putting the finishing touches to the all-new CLE Coupé and CLE Cabriolet ahead of a planned unveiling for the new two-door models, codenamed C236 and A236 respectively, in 2023.

Due on sale shortly before the sixth-generation E-Class saloon arrives next year, the CLE has been developed as areplacement for six Mercedes-Benz models: both the coupé and convertible versions of the C-Class, E-Class and S-Class.

The move comes as Mercedes consolidates its R&D spending on conventional combustion-engined models in favour of expanding its line-up with dedicated EQ-badged EVs such as the new EQE saloon, EQE SUV and EQS SUV – all of which are set to hit showrooms within the next 12 months.

The first stage of the consolidation plan was carried out in 2020 when Mercedes ended production of the S-Class Coupé and Cabriolet. Since then, it has also ushered in a new version of the Mercedes-Benz C-Class exclusively in four and five-door guises.

The basis for the CLE is this newly introduced, fifth-generation C-Class saloon, which sits on Mercedes’ second-generation MRA platform. Dimensionally, the new CLE slots between today’s 4686mm-long C-Class Cabriolet and the 4826mm-long E-Class Cabriolet, lining it up as a direct rival to the two-door derivatives of the Audi A5 and BMW 4 Series.

The latest photographs of a camouflaged CLE Coupé prototype testing on public roads and on a German race track confirm earlier reports that the new model will feature its own unique styling, with a racier profile and more muscular appearance than the C-Class Saloon and Estate, alongside which it’s due to be produced at Mercedes’ factory in Bremen, Germany.

They also preview what appears to be a new design language at the rear end, featuring thinner, rounder LED brake lights than on those on the current E-Class Coupé.

A cabriolet was previously spotted in winter testing with a fabric roof, wearing heavier disguise at the rear end. 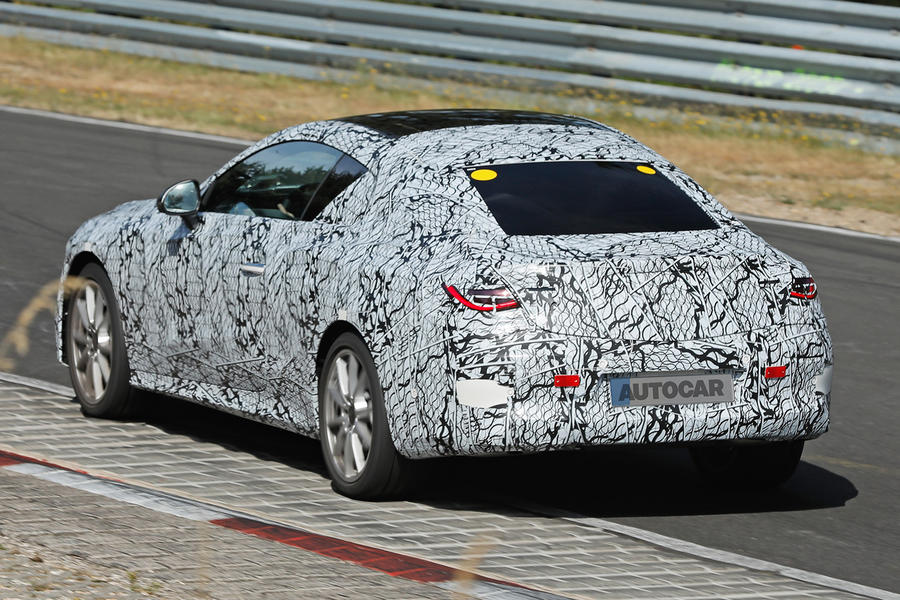