The new platform was announced at the virtual Nvidia GTC 2022 developer conference today. It’s designed to power next-generation incident response systems that can be used to pinpoint cybersecurity threats with high accuracy, and it’s powered by a combination of Nvidia’s GPUs and Morpheus platform.

Nvidia Morpheus is an open-source and highly scalable GPU-accelerated and AI-based cybersecurity processing framework. It’s designed to inspect network traffic, no matter how much there is, in real-time and flag anomalies while providing insights that can help users to address any potential threats. The new solution announced with Booz Allen is based on the latest version of Morpheus, which comes with advanced visualization capabilities around digital fingerprinting and sensitive information detection. 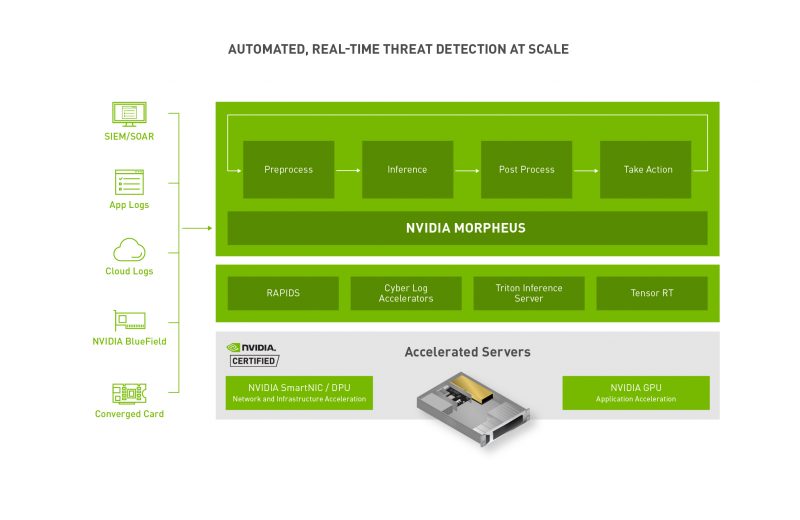 Using Morpheus, Booz Allen Hamilton has created a new tool called Cyber Precog, which is a GPU-accelerated software platform that delivers mission-relevant AI models and modular pipelines for deployment at the network edge. The software, which is aimed at Booz Allen’s customers, is designed to work in tandem with the Cyber Precog Flyaway Kit, which is a GPU-powered edge server that’s customized to support network traffic inspection in degraded and disconnected environments.

Cyber Precog enables data ingestion to be accelerated at 300 times the rate of a typical central processing unit, while improving AI training speeds by 32 times and AI inference by 24 times. In other words, the software, using a single Nvidia GPU, can deliver the same performance for cybersecurity workloads such as traffic inspection as 135 CPUs. The software should therefore be of immense help in detecting cybersecurity threats in low-resource environments at the edge, where compute resources are at a premium, Nvidia said.

Booz Allen Senior Vice President Matt Tarascio said his company’s customers operate many resource-constrained environments, so there should be a lot of demand for Cyber Precog’s capabilities.

“Nvidia GPUs, along with Nvidia’s Morpheus framework, allow us to bring enterprise capability to the edge so that the best analytic, data processing and AI capabilities can be delivered to the mission,” Tarascio explained. “Developing Cyber Precog is one example of the many ways in which we are working rapidly to unlock advanced tradecraft, develop unique capabilities and deploy scalable solutions.”

Nvidia said the latest version of Nvidia Morpheus is available to download now via GitHub or its NGC catalog of GPU-optimized software. It can be deployed in public clouds or hybrid clouds or hosted on-premises.