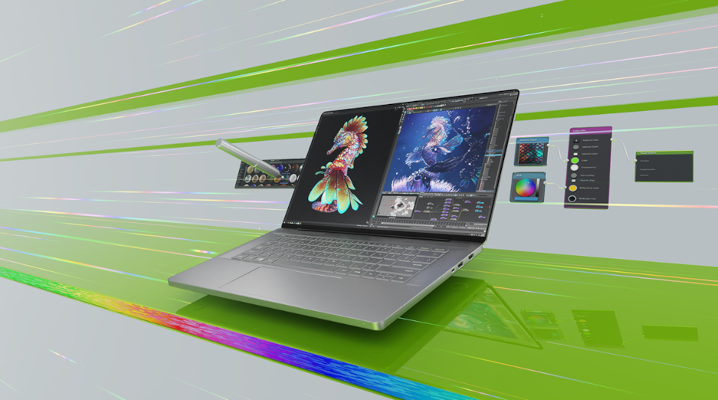 The GPUs are available as part of the company’s GeForce RTX 40 consumer chip series, which also includes its latest desktop graphics cards. Both the laptop and desktop GPUs in the RTX 40 series are based on Nvidia’s latest Ada Lovelace chip architecture.

“With the Ada architecture, we set out to transform the performance and power efficiency of gaming and creator laptops,” said Jeff Fisher, the senior vice president of Nvidia’s GeForce consumer graphics card business. “The new RTX 40 Series delivers enthusiast-class performance in laptops as slim as 14 inches, a new milestone.”

The RTX 4090 features 9,728 CUDA cores, which have a similar role as the cores of a central processing unit. The chip also includes other types of processing modules. There are Tensor Cores for running artificial intelligence models as well as RT Cores, circuits that video games can use to render lighting and shadow effects more efficiently.

Nvidia is rolling out the RTX 4090 alongside four other laptop GPUs: the RTX 4080, 4070, RTX 4060 and RTX 4050. The latter chips are also based on the company’s latest Ada Lovelace GPU architecture but include fewer cores. They feature between 2,560 and 7,424 CUDA cores that Nvidia says can in some cases match the speed of the RTX 3080, a high-end desktop GPU it introduced in 2021.

Graphics cards include a significant amount of dynamic random-access memory, or DRAM, that helps store the data they use in computations. Nvidia’s new laptop GPUs feature a type of low-voltage DRAM called GDDR6. As a result, the GPUs are up to three times more power-efficient than the company’s previous-generation silicon.

The top-end RTX 4090 features 16 gigabytes of GDDR6 memory. According to Nvidia, the four other laptop GPUs in the RTX 40 lineup provide six to 12 gigabytes.

The use of GDDR6 memory isn’t the only contributor to the chips’ power efficiency. To reduce electricity usage, Nvidia also equipped the chips with an improved version of its clock gating technology. The technology enables a GPU to reduce the power consumption of circuits that it doesn’t actively use, which improves efficiency.

The RTX 40 laptop GPU series shares several features with Nvidia’s latest desktop graphics cards. One such feature is DLSS 3, a software tool that uses machine learning to enhance the visual fidelity of video games. Nvidia has optimized the feature to run more efficiently on laptops.

The first laptops to feature RTX 40 GPUs are expected to become available on Feb. 8.