PHILADELPHIA’S former lightweight contender Ivan Robinson is now 51 and taking it upon himself to make sure the Philadelphia way is passed down to future generations.

For many, Philly is a fight town first and foremost and being the City of Brotherly comes second with the Liberty Bell and the Rocky steps tied for third.

Robinson was a decorated amateur who won and lost in several contests with a young Oscar De La Hoya, ultimately failing to qualify for the 1992 Olympics, but the Philly hopeful also fought future professional notables including Thomas Damgaard, Michael Clark and Julian Wheeler, boxing in tournaments around the globe including Australia, Italy, Russia and Puerto Rico.

But Robinson’s real grounding came in the Philadelphia gyms, where character is born and discipline is shaped.

Robinson didn’t just learn the Philly playbook, he studied the history. He knew what was expected of him when he boxed in front of the knowledgeable Philly fans, who demanded competitive fights in order to part with their money at the Blue Horizon and at the National Guard Armory.

“We had that grit, we had that will, it was like a tractor trailer pulling cars,” Robinson said, happily recalling how hard it was to make it as a hungry up and comer. “We would switch into whatever gear we had to to make it happen, and that’s where I was at. That’s where [Charles] Brewer was at, that’s where Bennie Briscoe was at. It’s just different now. You’ve got Stephen Fulton, you’ve got Jaron Ennis, they’re a different breed now. Those guys are not trying to get hit, those guys are trying not be in wars. Now, I’m not saying they need to, but when it comes down to it… It’s like being in the army. They teach you how to prepare for war. If a war happens, you’ve got to be ready, regardless of whether it’s going to be your life or someone else’s.”

Robinson didn’t have it easy. On his way up there were fights with opponents who were 20-4, 12-2-2, 20-4, 14-4-1 and 7-1. There were no free passes, and Ivan defeated 14-0 Panamanian Demetrio Ceballos for the USBA lightweight title in October 1995. Robinson also beat an emerging Emanuel Augustus, then lost his shot at a world belt to Australian veteran Philip Holiday for the IBF crown. A second consecutive defeat, to the decent Israel Cardona, perhaps meant Arturo Gatti’s braintrust felt Robinson had peaked and might go quietly. They got it wrong.

Robinson and Gatti fought two wars inside four months in Atlantic City in 1998 and Robinson was a hot property again. He climbed off the floor from a fourth-round knockdown to beat Gatti via split decision in the Fight of the Year and the Upset of the Year, and Ivan won the rematch on points.

While Robinson was proud to earn the honours of being involved in that historic first brawl in particular, he saw himself as more of a boxer than a blood and guts soldier.

“I practically was a boxer,” Robinson insisted. “I tried not to get into brawls when I didn’t have to. But as people can see in the Gatti fights, he took me there. The first Gatti fight was like a respect fight. I love Gatti. I knew him before we fought each other and I never thought we would fight each other, but the first fight… At the press conference he told me he would knock me out and then he told me, ‘I don’t bring knives to a gunfight.’ That really made me mad, and he said he was going to beat me up and all that. I think, in the back of Gatti’s head, he knew he couldn’t beat me. There was no way he could have beaten me. The only way he could have beaten me was if he knocked me out, which he almost did in the 10th round… that never worked. But I had to get that respect, that’s why in that first fight there was a lot of back and forth. He hit me, I hit him and going in to the fight, I just didn’t care. I wanted to beat him so bad that it didn’t matter what I had to do or how I had to do it.”

Robinson might have already seen and done a lot by then. He might have been roughed up in the Philly gyms, and he might have done some of the roughing up himself, but there is no way of knowing if you have the depth of courage needed to survive a Fight of the Year with someone like Gatti, who lived for wars like that.

“Not everyone can do it,” Robinson explained. “Not everyone has the guts to do it. Everyone doesn’t have the heart to do it and everyone doesn’t have the will. That was the thing I loved about Gatti – when I didn’t fight him! – was that his heart was so big, and he always said that he would die in the ring. Well, I understand that. I just thought I was that skilful that I knew that if I really got tired, really got hurt and I couldn’t bounce back or throw no punches, I knew how to hold, make the ref give time to break me. I was always in condition, [and] my will was something. I’m from Philly. We don’t care. We come hard.” 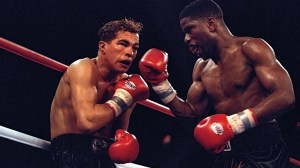 But for all of the career momentum after two extraordinary wins over the future Hall of Famer, Robinson lost his first bout of 1999 to Angel Manfredy, who was rebounding from his own defeat to Floyd Mayweather.

Robinson contends his mind wasn’t on the job. He did not think the Manfredy fight was going to happen when it was agreed, perhaps he was dining out on the Gatti victories and when he crashed the weight off, Robinson wasn’t in the same shape or condition he had been for Gatti, even if the scales read the same.

“Angel is a great fighter,” Robinson conceded. “He’s a great friend of mine, but I’ll tell you I’m not one to bite my tongue, I don’t sugarcoat nothing. Manfredy got a gift, because I wasn’t the Ivan Robinson that fought Arturo Gatti. If I was that Ivan Robinson, Manfredy would have never beat me. At that time, I felt I was a little more skilled than Floyd and Floyd wasn’t as skilled as I was, and Floyd beat him. Even though Floyd was lighter than I was at the time [super-feather], Floyd beat him and knocked him out and at that time I threw way more combinations than Floyd and I was pretty accurate with everything I threw.”

Manfredy beat Robinson via a wide decision over 10 rounds, then called out Mayweather for a rematch that never happened and Robinson went about his own business, trying to get back on track. There were a couple of wins to close out the year but by 2000 he was becoming blue corner fodder, served up to quality fighters like Antonio Diaz, Vivian Harris (whom Robinson managed a draw against) and Jesse James Leija.
Robinson’s decline was stereotypical in that the bulk of the losses came at the end of his career, with his heyday in the rearview mirror. His last 14 fights came between 2000 and 2008 and he lost nine of them when he’d only lost three in his entire career beforehand.

There were defeats to Chucky T, Michael Stewart and, in 2005, to Julio Cesar Chavez. By then, also stereotypically, Robinson’s fights were on and off, his career was stop-start until a final loss in far-flung Idaho.

It had been a stellar career and Robinson was content with how it turned out.

“Life after boxing has been good to me. I have no problems. My son is a basketball player, hopefully he gets drafted to the NBA, Ivan Robinson Jnr.”

Robinson also trains boxers in Philadelphia. He works with heavyweight Dominique Mayfield and some amateurs who are set to go pro.

“It is tough not being able to do the things I used to do,” Ivan admitted. “I see some young fighters and think, ‘Damn, I did that stuff 30 years ago.’ And I get the itch, where I want to hit the bags and everything, but after three or four rounds I think I’ll just sit down and stick to coaching!”

Robinson smiles. He is not just from a city of rich fighting history, but he’s from a city that has spawned some excellent trainers, including George Benton and Bouie Fisher. Robinson is now one of the veterans giving back to the young crop of boxers coming through, and he enjoys watching Philly’s top dogs like Stephen Fulton and Boots Ennis even if he admits the game has changed from his time.

Robinson doesn’t look old yet, there are a few grey flecks in his hair and his goatee, but he has been around the boxing block a few times and has plenty to impart to the next generation.

“Everybody in the gym has respect for me and all the young boys are calling me Old Head, so I’ll sit down, keep watching the guys come through, hopefully grow some champions and train and manage some,” Robinson, who called it a day after 32 wins (12 stoppages), 12 losses and two draws, continued. “But boxing has been good to me. Everybody asks me if I would do it over again. I would definitely do it over again, the only thing I would do differently – and a lot of people don’t know this – my dad was with me from when I was five. I got married at 22 and me and him got into a dispute and I fired him, that is about the only thing I would ever change. I would have kept him, because if I kept my dad, I might have had a fabulous career. I had a great career, I fought some of the best guys in my division. I fought Julio Cesar Chavez, I never ever thought I would fight that man. He fought Meldrick [Taylor] and Meldrick lived four blocks from me, we were close, but I never thought I would get the chance to fight Chavez, but it happened. So my career was great. I saved my money, I’m not as rich as Floyd but I’m doing okay.”