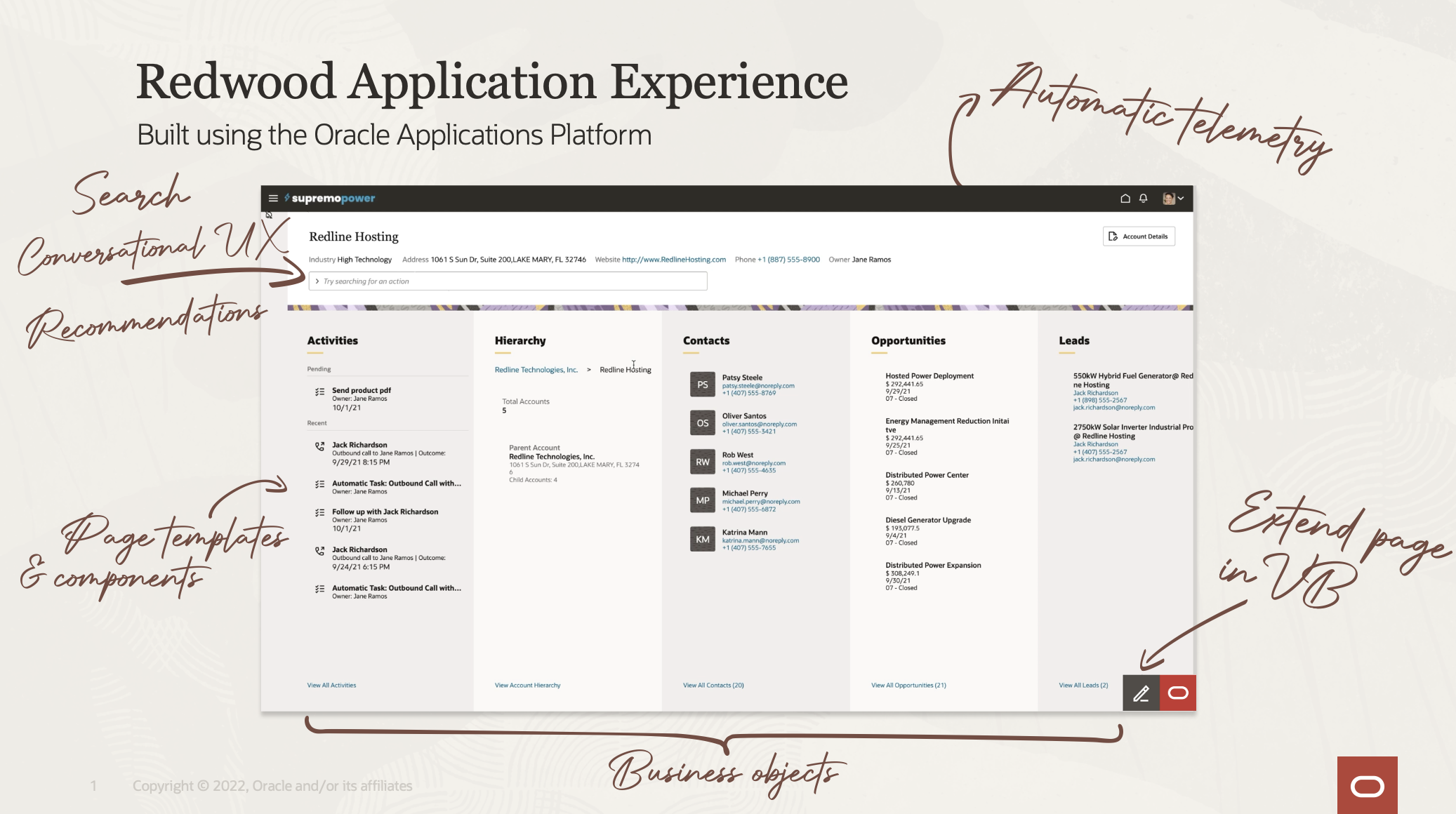 Oracle Corp. today is making the full range of user interface design tools, templates and objects that it uses to develop its commercial applications available to all users of its Oracle Applications Platform.

The release is the culmination of a three-year effort to overhaul the company’s user interface along a set of design principles it calls Redwood. The components include page templates optimized for different use cases, a search engine, self-learning recommendations, telemetry-based performance management and low-code development tools. Oracle said the tools it’s now putting customers’ hands are exactly the same as those it uses to build its Fusion line of enterprise applications.

The announcement isn’t a new product per se but a milestone in the continuing evolution of the applications platform. “This is the first time we’ve brought everything together synched up as one platform with guidelines and documentation for customers both internally and externally,” said Hillel Cooperman, senior vice president of user experience and design and Redwood’s principal architect. “This is not a destination but a journey.”

As such, developers shouldn’t expect an entirely new experience when they launch their development toolset today, but the changes should be noticeable and significant, Cooperman said. “It will both be familiar and also blow their mind,” he said.

The full platform boils down to nine building blocks, the most basic of which is a page template that implements all the foundational behaviors for accessibility, display and internationalization. Another, called conversational experiences, provides a natural language interface that can be adopted for different use cases.

Intelligent recommendations simplify the task of making selections from a long list by presenting a defined set of choices based on a user’s previous selections as well as the context of what they’re trying to accomplish.

A search component based on the open-source Elastisearch engine enables developers to incorporate self-tuning search capabilities into their applications and preserve learned suggestions across devices. It also features machine learning-based suggestion strings and tolerance for typographical errors into what Oracle said is a highly scalable search engine. “Enterprise search should be as good as consumer search,” Cooperman said.

Measure as you build

Application telemetry components allow developers to gather user feedback on applications continuously using functions embedded within the user interface components and integrated with DevSecOps tools. Significantly, the features are embedded into the development platform rather than added on afterward.

“We find that historically people often don’t get to telemetry,” Cooperman said. “This platform has telemetry built into the core. On day one you are getting signals about how the application is being used, what paths people are taking, where the gaps are and where people bail out.” Executives said the telemetry features are not intended to compete with full-fledged observability suites but are specific to the Oracle platform.

Oracle is also making a full set of low-code development tools available with its Visual Builder Studio to enable nontechnical users to create basic applications that can be extended with professional programming languages. Price said the features are also for professional developers who have “a lot of apps to manage and need efficiency and scalability. It’s about efficiency, not just a skills match,” he said.

Accessibility features that comply with the World Wide Web Consortium’s Web Accessibility Initiative are built into the platform for the benefit of users with disabilities. Extensive new data visualization features have been added that “turn up the volume 10X on our historical commitment to visualization,” Price said.

Developers will also have full access to Oracle’s library of Business Objects which they can choose and add to their own applications as well as create and share with others. Usage of such componentry ensures that “changes don’t break,” Cooperman said. “Developers don’t have to manage shifting grounds and worry about breaking things underneath.”