“I set the coffee down next to him and that’s when I saw his face. I saw his eyes. And they didn’t look like eyes anymore”

Paulina Porizkova is detailing the harrowing moment she discovered her estranged husband Ric Osasek’s body. The Cars frontman died of natural causes back in September 2019 in his New York City Home; he was 75.

In a teaser clip for Wednesday’s episode of “Red Table Talk,” the 57-year-old supermodel opened up about the final moments she shared with Ric before unexpectedly finding him dead in his bedroom.

“He had surgery because they’d found stage 0 lung cancer,” Porizkova explained. “And he was recovering really well. Two weeks [later], he was walking around, he was starting to feel much better, he was sleeping better. And this night, he said, you know what, I’m feeling kinda tired.”

The following morning, Porizkova went to wake Ocasek, figuring he had decided to sleep in late. At the time, she hadn’t been too concerned about his irregular sleeping patterns, as he “tended to sleep late” due to his “rockstar hours.”

It wasn’t until Porizkova got a clear look at Ocasek’s face that she realized he was gone.

“I set the coffee down next to him and that’s when I saw his face. I saw his eyes. And they didn’t look like eyes anymore,” she said. 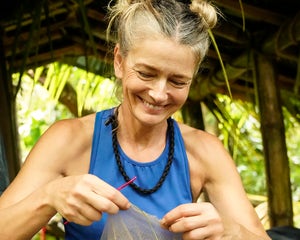 Paulina Porizkova Still Recovering from Beyond the Edge Reality Show, Trying to ‘Fix’ Her Hips

In May 2018, the couple announced they would be parting ways after 28 years of marriage. When Ocasek passed away the two had been living together, despite being separated for several years. They share two children: Jonathan and Oliver.

After his death, Porizkova discovered that she was not included in the singer’s will. She eventually settled matters with his estate in October 2021; though she refrained from revealing the size of her check, she told Los Angeles Magazine’s podcast The Originals that she’s “gonna be fine.”

In another preview clip from Red Table Talk, she explained she was “very specifically broke” when he died.

“I was a woman with assets. I had two mortgaged houses. And I had a pension plan that I can access in 10 years and zero cash, and no way to pay for anything,” she said. “So, I was in a really, really peculiar position of being a woman with assets and no money.”

She added that she had “no cash” for groceries and had friends buying them for her for a short while.