The 27-year-old “I Like You” singer revealed just how enraptured he is by his new baby girl while speaking with GQ. Malone welcomed the newborn with his fiancée just four months ago.

He described his daughter as “a legend” as he promoted his recent collaboration with Moose Knuckles and explained his idea to include children’s sizing for his new line. Though the baby is “huge” and “super tall,” she won’t be rocking her father’s Moose Knuckle clothing just yet.

“I’m trying to get a size for her. She’s a little bit too tiny, but she’ll grow into it,” he said. “I just thought it was a fun thing to do, especially with the baby on the way at the time we were working on it. Everybody should be able to be drippy and somewhat bussin’, you know what I mean?” 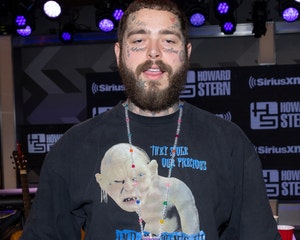 According to Malone, born Austin Post, his baby girl is already showing him up in terms of style.

“She’s so swaggy. We got her overalls, Realtree camo everything, some nice hoodies, some zip-ups. She’s so cool,” he gushed. “She’s way cooler than me, but she definitely took a little inspiration from me.”

The nine-time Grammy Award nominee is currently on tour and opened up about the difficulties of being far from home and his new family.

“It’s really tough not being able to see her, but she’s coming out more often now,” Malone confessed to the publication. “I’m just happy to see her. But it is heartbreaking having to leave and not be able to be with her all the time.”

Post also revealed that he and his team are trying their best to make his daughter a fan of her dad’s music.

“She hasn’t cried whenever I put my music on so far, which I think is a good sign, but we’ll wait and find out,” Malone said. “I got to let her decide. I tried to play her some stuff, but I can’t really tell what she’s into right now. She’s going to have to like my music, I think, [or] she’s going to get used to it — I know everybody at the house plays it for her and hopefully, they’ll get stuck in her head. Kids love my music for some reason, which is awesome, so I’m hoping that she just goes with the flow on that one.”

The “rockstar” rapper admitted that his tactics may have an opposite effect.

“But that’ll probably make her hate it though: she’ll be like, ‘Dad, you suck. Just go away,'” he laughed. “I love playing her lullabies. They make lullabies of my songs. Those are nice to listen to. Sometimes we’ll even put it on and I’ll have to guess what song it is and I just forget all the melodies. I’m like, ‘What song is this?'”