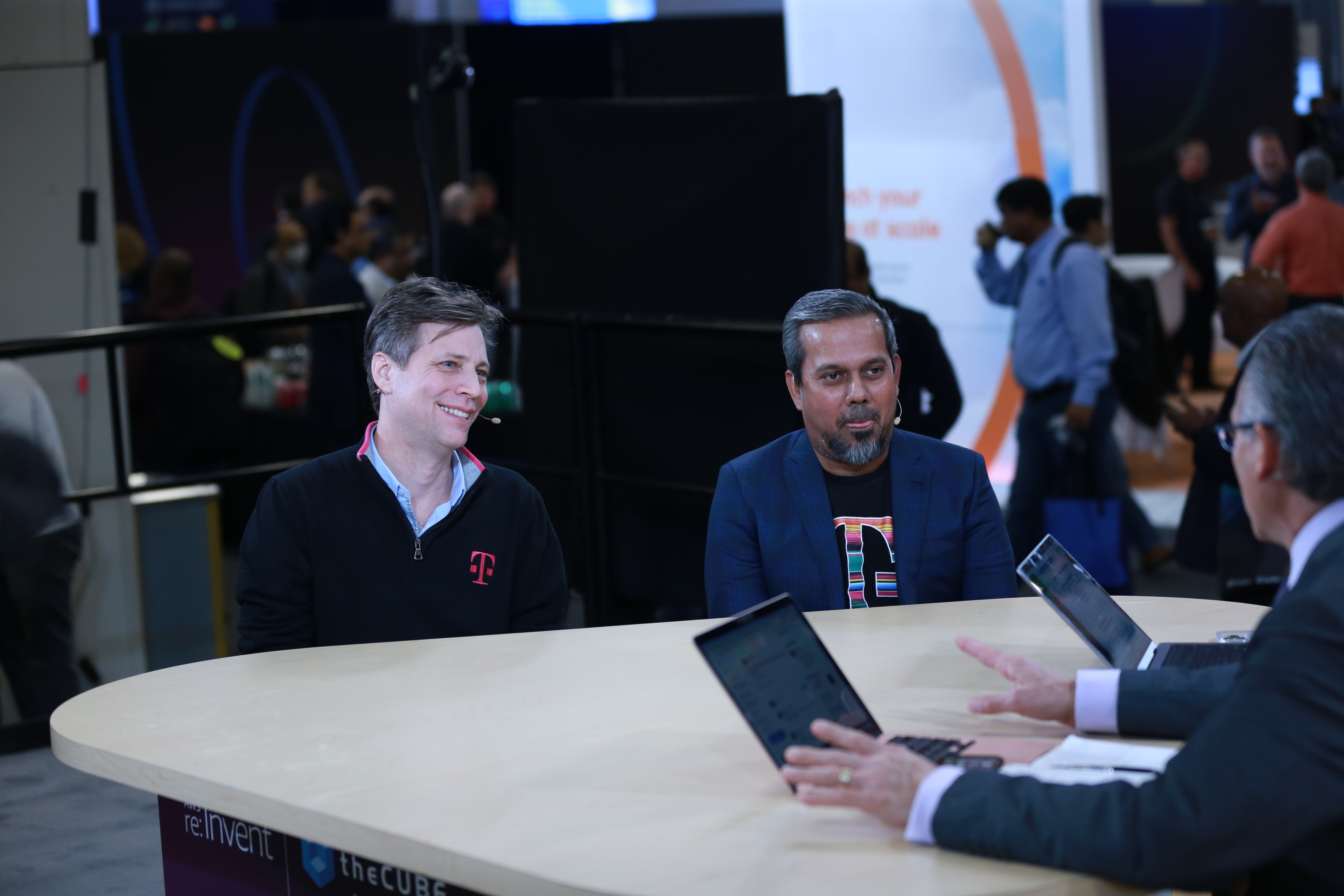 T-Mobile USA Inc., who has branded itself as the “un-carrier,” is now poised to be a leader in the U.S. in telephone communications.

The telco has done this by creating a digital commerce domain that runs a digital commerce platform with a set of application platform interfaces — referred to by T-Mobile as “headless APIs,” according to Glen Kurisingal (pictured, right), director of product and technology at T-Mobile. This seemingly simple digital experience empowers everyday customers to quickly and easily complete their shopping transactions — and it was T-Mobile’s first tier-one system to go 100% cloud-native.

So far, T-Mobile’s strategy seems to be working. Just this year, the company processed over 3 1/2 million orders, amounting to a billion and a half dollars worth of business for T-Mobile.

So how did this journey come about? Kurisingal and Nicholas Criss (pictured, left), senior manager for product and technology at T-Mobile, spoke with theCUBE industry analysts Lisa Martin and Dave Vellante at AWS re:Invent, during an exclusive broadcast on theCUBE, SiliconANGLE Media’s livestreaming studio. (* Disclosure below.)

They discussed the details behind T-Mobile’s cloud-native digital commerce platform and how customers are enjoying such a digitally-savvy telco. [The following content has been condensed for clarity.]

Vellante: When you talk about ‘headless APIs’ … you’re talking about a loosely coupled system that you can evolve without bringing the whole system down. Can you explain that in a little bit more detail?

Kurisingal: So the concept of [headless APIs] … allows us to build and operate a platform that runs … loosely coupled from the user experiences. So when you think about this from a simplistic standpoint, you have a set of APIs that are headless, and you’ve got the website that connects to it, the retail store applications that connect to it, as well as the customer care applications that connect to it. Eessentially, what that does is it allows us to basically operate all these platforms without being tightly coupled to each other.

Vellante: Could you guys could talk about what the genesis was for this system?

Kurisingal: We started this journey back in 2016, and at that point T-Mobile had seven or eight different commerce platforms. We’ve talked about T-Mobile being the ‘uncarrier.’ It’s a brand that we have basically popularized in the telco industry. We would come out with these massive uncarrier moves, and every time that announcement was made, teams have to scramble — because … every single system needs to be updated. So that’s where we started when we kicked off this transformational journey. Over time, we have brought it down to one platform that supports all these experiences.

Vellante: Are you leaning into to serverless and AWS Lambda?

Kurisingal: Back in 2016 when we started, we were all on [AWS’s EC2s] and … over the last three or four years, we have … gone through that journey where we went from EC2 to containers. At some point, we’ll get to where we will be serverless. We’ve got a few functions running, but … we are somewhere towards the process of … going from … containers to serverless.

Vellante: What does your team look like, and what are the skill sets that you’ve got that you’re deploying?

Criss: One of the things that really has helped us is we’ve had a partner. So [UST] is a digital services company, and they’ve really … been on the journey the same timeline that we were. And when I came to the [T-Mobile] commerce team, we were really struggling, especially from that operational perspective. The team was just not adapting to that new cloud reality.

But we brought [UST] in, because not only were they really able to understand the stuff, but they had built a lot of the platforms that we were going to be leveraging for commerce with us on the cloud team. So, not only did these folks have the right skill sets, but they knew how we were approaching it from a T-Mobile cloud perspective.

(* Disclosure: UST sponsored this segment of theCUBE. Neither UST nor other sponsors have editorial control over content on theCUBE or SiliconANGLE.)