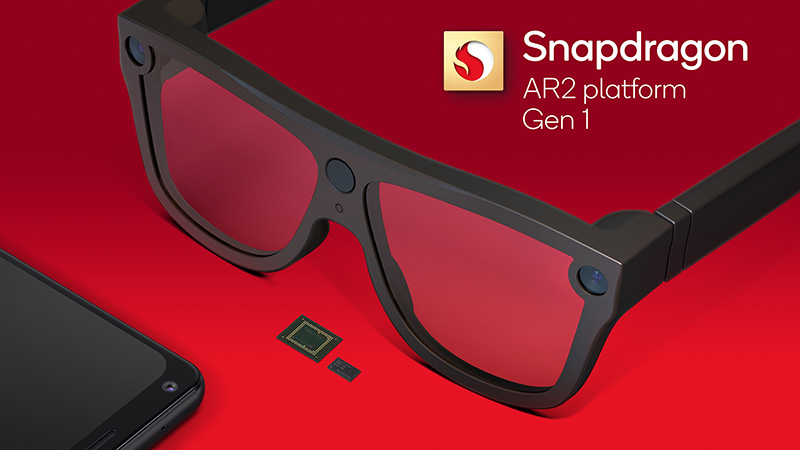 Qualcomm Technologies Inc. today unveiled a new chipset platform for augmented reality glasses, the Snapdragon AR2 Gen 1 Platform, to power the next generation of wearables and make them lighter and lower-power.

The chipmaker revealed the new platform during this year’s Snapdragon Summit after announcing its next flagship chipset for mobile phones, the Snapdragon 8 Gen 2, which focuses on performance for AI-related tasks and adds new communications capabilities.

Qualcomm said the new AR2 chipset is purpose-built for augmented reality and is designed to help create the thinnest possible wearable technologies. As a result, it is a multiple-chip, distributed technology rather than a single-chip chipset. As a result, the entire platform can be placed throughout glasses and distribute processing and heat dissipation and reduce the form factor worn on the face.

That allows a better weight distribution and decreases the width of the eyeglass arms on the sides of the face. The different chips are optimized for co-processing and include an AR processor for perception and display output, an AR co-processor that handles sensor aggregation, AI and computer vision. There’s also a connectivity chip for low-power Wi-Fi 7, providing low-latency connectivity in smartphones and other host devices.

“We built Snapdragon AR2 to address the unique challenges of headworn AR and provide industry-leading processing, AI and connectivity that can fit inside a stylish form factor,” said Hugo Swart, vice president of XR product management at Qualcomm.

The chipset combines a Hexagon Tensor processor for 2.5 times higher performance in artificial intelligence processing than the XR2 chipset, which is designed for bulkier mixed reality and virtual reality headsets. The AR2 is also capable of 50% lower power and its circuit boards are 40% smaller, allowing for smaller, sleeker augmented-reality wearable device production.

As the technical needs of augmented reality diverge from virtual reality, Swart explained, Qualcomm wants to stay ahead of the curve for hardware makers and the Snapdragon AR2 is the platform that will give them the foundation that they need to build on for the future.

The Gen 2 Kyro 2 central processing unit of the new chipset is claimed to have 35% faster performance and 40% better power efficiency. That’s thanks to improvements in multithreaded performance enhancements that can reach speeds up to 3.2 gigahertz. A new graphics processing unit is capable of 25% faster graphics rendering. The processor is built on the same four-nanometer chip production process as the Gen 1.

Qualcomm also said it improved its Hexagon processor overall to boost its AI performance up to 4.35 times faster than the previous generation. That should assist with common AI tasks such as translating between languages in real time.

As for connectivity, the Gen 2 features Wi-Fi 7 capability, which will provide extremely low latency for wearables and other systems such as VR and AR headsets – at more than double Wi-Fi 6 speeds. It also contains the AI-powered Snapdragon X70 modem, announced in February, that includes an AI processor for greatly enhanced 5G network speeds. In addition, the modem enables two active 5G SIMs, which allows users to connect to two 5G networks at the same time.

The chipset allows for spatial audio with dynamic head-tracking as well. That means wherever the users move their head, the sound follows them, allowing for immersive listening experiences. Streaming audio can support up to 48-kilohertz lossless music streaming. And microphone audio can have latency as low as 48 milliseconds.

Qualcomm said the new chipset will start arriving in devices sometime before the end of 2022 and the list of partners includes Oppo, Motorola and Republic of Gamers.