“I was like: who’s playing classical music outside my room!” she shared, along with some videos from her room.

On Monday, Kourtney Kardashian and Travis Barker celebrated the one-year anniversary of their engagement by returning to the beautiful location of the stunning proposal last October.

The couple — who tied the knot in May — not only returned to the luxury resort where they became engaged — the Rosewood Miramar Beach hotel in Montecito, California — but also appeared to have recreated the special moment on the beach, complete with a stunning arrangement of red roses.

And actress Rebel Wilson had a front-row seat. 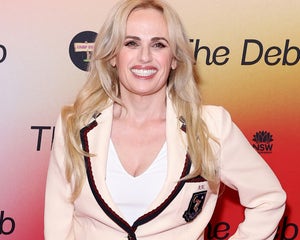 Rebel Wilson Gained Weight on Holiday and That’s Okay: ‘Doesn’t Help to Be Hard on Yourself’

As shown in footage shared to her Instagram Stories, the “Pitch Perfect” star — who was staying at the five-star hotel — spotted Kravis celebrating the one-year anniversary of their engagement on the beach, with the affair also including candles inside glass jars and two musicians playing music in addition to the floral arrangement.

Rebel, 42, shared a video of Kourtney, 43, and Travis, 46, locking lips while surrounded by the elaborate display of red roses.

“I was like: who’s playing classical music outside my room! 🙈,” wrote the actress, who appeared to be filming from the balcony of her room. “have fun lovebirds 💗.”

The “Senior Year” star posted another video that showed Kravis walking on the beach and entering the large flower arrangement as classical music played in the background.

“Too cute @kourtneykardash @travisbarker,” Rebel wrote over the clip. 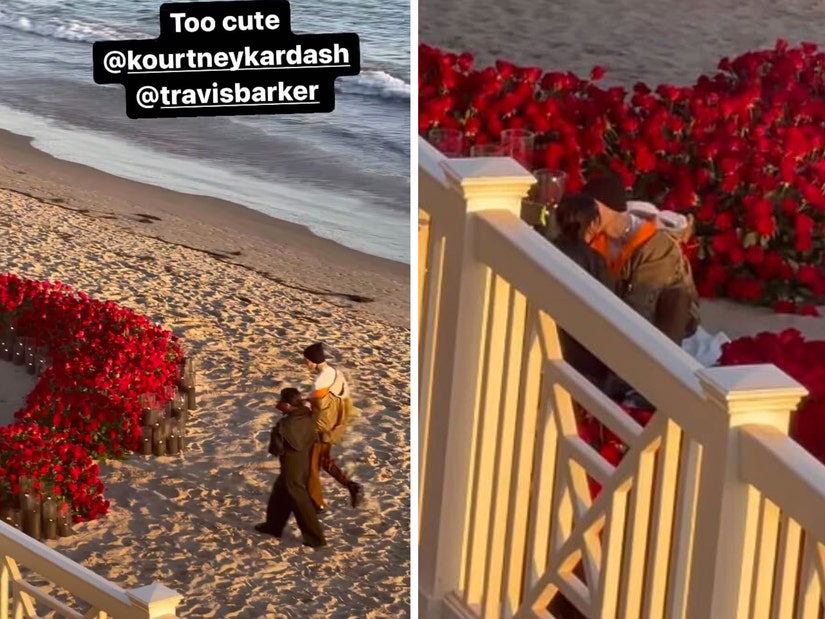 There also appeared to have been a camera crew present. While one might assume it was for Hulu’s “The Kardashians,” TMZ reported that the two were shooting a wedding commercial, according to a security guard who overheard.

Back in October 2021, Travis got down on one knee and proposed to Kourtney at the Rosewood Miramar Beach hotel. The couple later went on to have three different wedding ceremonies.

The newlyweds first exchanged their vows via Elvis impersonator in an unofficial ceremony in a Las Vegas chapel after the Grammy Awards. The blink-182 drummer and Poosh founder later made things legal when they tied the knot at a Santa Barbara courthouse.

Kourtney and Travis then said “I do” for the third time at L’Olivetta, a villa owned by Dolce & Gabbana in Portofino, Italy in May with their closest friends and family.