On the latest episode of the Peacock series, Brandi appeared to bring up Taylor’s ex-husband’s suicide, which Eva Marcille described as “the most disgusting thing to say.”

Brandi Glanville went for the jugular during an argument with her “The Real Housewives Ultimate Girls Trip: Ex-Wives Club” co-star Taylor Armstrong — causing several of the other “Housewives” ripped Brandi for going “way too low.”

On Thursday’s episode of the Peacock series, Brandi, 49, and Taylor, 51, had a heated spat over the success of “The Real Housewives of Beverly Hills,” debating whether or not Brandi joining the series as a “friend” of the “Housewives” in Season 2 impacted its success.

During the discussion, which went down at a group dinner, Taylor — who was one of the RHOBH OGs — called Brandi a “little cinnamon stick in an actually successful pot of water.” Then, at one point, Brandi threw a low blow at Taylor when she appeared to reference the death of Taylor’s ex-husband, Russell Armstrong, who committed suicide in 2011.

“Were you successful? ‘Cause your husband …” Brandi snapped at Taylor, with the rest of her insult appearing to have been cut off. “I don’t think that’s successful.”

A few of the other “Housewives” called out Brandi’s comment in a confessional.

Ex “The Real Housewives of Atlanta” star Eva Marcille said Brandi’s remark was “the most disgusting thing to say.”

Former “RHOA” star Phaedra Parks, on the other hand, didn’t seem too fazed by Brandi’s comment. “Anyone throwing a rock at Brandi should expect five bullets to come back,” she said. 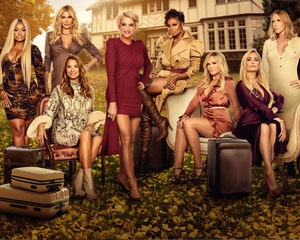 Taylor was a main cast member on Seasons 1 through 3 of the RHOBH and appeared as a guest until Season 6, while Brandi was featured as a friend of the “Housewives” on Season 2 and was a lead cast member through Season 5, before later appearing as a guest on Season 6 and Seasons 9 and 10.

As for why Brandi brought up Russell’s death during her fight with Taylor, Brandi said, “Because she’s coming after me!” Taylor, on her part, said she was “not coming” for her.

However, Brandi wasn’t the only one who took things too far during dinner as Dorinda, 57, seemingly gave Brandi a taste of her own medicine — hypothetically. Since Brandi had referenced Taylor’s ex-husband’s death, Dorinda — who is a widow herself — asked Brandi how she would feel if her son died and someone brought it up.

And Brandi — as well as many other women at the table — were not happy with Dorinda.

“What are you doing, Dorinda? This isn’t your fight and how f—ing dare you?” Brandi said during a confessional. At the dinner table itself, however, Brandi abruptly left as a result of Dorinda’s comments.