The latest report from Jon Peddie Research this week has brought some sobering news for graphics processing unit manufacturers. It revealed that GPU shipments in the third quarter saw their biggest drop since 2009, falling by more than 25% compared to a year earlier.

Jon Peddie’s report covers GPUs for desktops, laptops and also central processing units with integrated graphics, meaning that it’s pretty comprehensive and a good reflection of the overall personal computer industry. It’s a market that has taken a bit of a tumble recently, based on PC maker’s most recent earnings reports, with consumers and commercial buyers alike shunning the purchase of new computers amid rather miserable economic conditions.

Nvidia Corp. for instance revealed this month that its gaming GPU revenue had fallen by 51% year-over-year and by 23% on a sequential basis.

Jon Peddie, who is president of his namesake U.S. research firm, said what makes the situation worse is that the third quarter is traditionally the high point of the year for GPU and PC makers. He said that the sales numbers came in below even their worst expectations.

“All the companies gave various and sometimes similar reasons for the downturn,” Peddie said. “The shutdown of crypto mining, headwinds from China’s zero-tolerance rules on kit and rolling shutdowns, sanctions by the US, the purchasing run-up during Covid, the Osborne effect on AMD while gamers wait for the new AIBs, inflation and the higher prices of AIBs, overhanging inventory run-down, and a bad moon out tonight.”

The research tallies with a similar report from the Taiwan-based research firm TrendForce Inc., which said last week that sales of dynamic random-access memory chips had fallen by 29% sequentially in the third quarter, to $18.2 billion. That marked the second-largest decline in sales the industry has seen since 2008.

Somewhat surprisingly, Intel Corp. continues to hold the largest share of the computer GPU market when including CPUs with integrated graphics, due to its enormous x86 footprint. What’s more, it managed to grow its share of the market by 10.3% to 72% of overall sales during the third quarter. Nvidia’s share fell to 16%, with Advanced Micro Devices Inc. accounting for just 12% of all sales 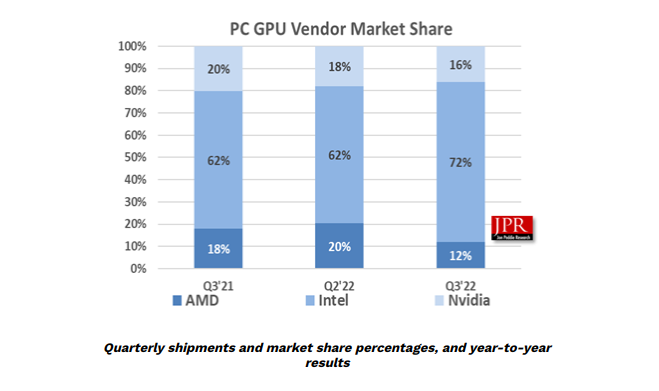 Intel apparently grew its market share as a result of a 4.7% sequential increase in GPU shipments during the period. Jon Peddie didn’t say what drove this, but it’s likely that the wider availability of Intel’s latest Arc discrete GPUs had something to do with it. Those chips were initially held back by a slow rollout due to Covid-related shutdowns in China. Meanwhile, Nvidia and AMD saw GPU shipments fall by 19.7% and 47.6% respectively.

Jon Peddie said it expects no letup in the market downturn as we enter the fourth quarter, but it won’t be all that bad. “Generally the feeling is Q4 shipments will be down, but average selling prices will be up, supply will be fine and everyone will have a happy holiday,” Peddie promised.