Salesforce Inc. kicked off its Dreamforce conference this week by bringing 40,000 members of its extensive community together in San Francisco for the first time in more than two years and unveiling new offerings to allow them to connect with each other in new ways long after the event concludes Thursday.

The Dreamforce event, built around a theme of the “Great Reunion” after a global pandemic limited in-person events, featured the release of a real-time data platform called Salesforce Genie to power the firm’s customer relationship management products. 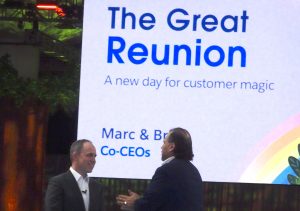 The company also launched a new collaborative feature for Slack, which was acquired by the CRM giant last year. This week’s announcements recognized that the pandemic has changed a lot in the business world, and Salesforce has responded to this new reality by strengthening tools for customer engagement.

“We’ve got a lot happening, but we have to recognize that a lot has happened,” Marc Benioff (pictured, right), co-founder and co-chief executive, said in his keynote remarks on today. “We need to have a beginners’ mind. What do we really want and what is really important to us? We want to connect with your customers in a whole new way.”

Salesforce’s new way to connect with customers through Genie was characterized by Benioff’s co-CEO Bret Taylor (left), as “the most significant shift in our platform in 20 years.” The real-time data approach is designed to meet expectations for highly personalized engagement that incorporates meaningful data at warp speed.

The company’s announcements this week reflect Salesforce’s interest in maximizing the value of its major acquisitions over the past several years. Genie will include connectors for the MuleSoft integration platform which Salesforce purchased in 2018, and its Tableau data virtualization offering, acquired in 2019.

Salesforce’s latest addition for its Slack messaging platform includes a new Canvas tool that will allow users to store information inside a workspace on the channel and link to workflows. Canvas was built on technology from Quip, a startup co-founded by Taylor that Salesforce acquired in 2016.

“It’s like Quip graduating from high school and going off to college,” Taylor said during a media session following his keynote address.

The Dreamforce event comes a month after Salesforce beat quarterly expectations, but delivered a disappointing forecast for fiscal 2023. That did not prevent Benioff from noting during his keynote remarks that Salesforce recently leapfrogged CRM competitor SAP in the enterprise application business.

“I have a lot of esteem for SAP,” Benioff said. “They had a great quarter; we had a better quarter. That means that Salesforce is the world’s largest enterprise apps company.”

Salesforce’s warnings about the coming fiscal year reflected a recognition by company executives that sales cycles were getting stretched and new deals had received a greater level of scrutiny. Benioff noted today that his company was well-positioned, but the current post-pandemic economy has resulted in a journey into uncharted waters.

“What we went through in the last two years was obviously completely different,” said Benioff in his session with the media. “It’s a new day from where we were two years ago to where we are now. The buying environment is robust, and the relevancy of the company has never been higher.”

One new look for Salesforce could be seen in the first hour of the keynote session itself. Unlike past years when Benioff strode into the Dreamforce conference hall by himself, he was joined today by Taylor.

The joint keynote presentation reflected the culmination of a rapid career progression for Taylor, who co-created Google Maps in his first job out of college as a group product manager between 2003 and 2007. Taylor took the opportunity during his post-keynote session with the media to acknowledge Benioff’s influence on his tech career.

“When I started my company, Quip, my first phone call was to Marc because I had never sold enterprise software before,” Taylor said. “Marc is my mentor and my friend.”