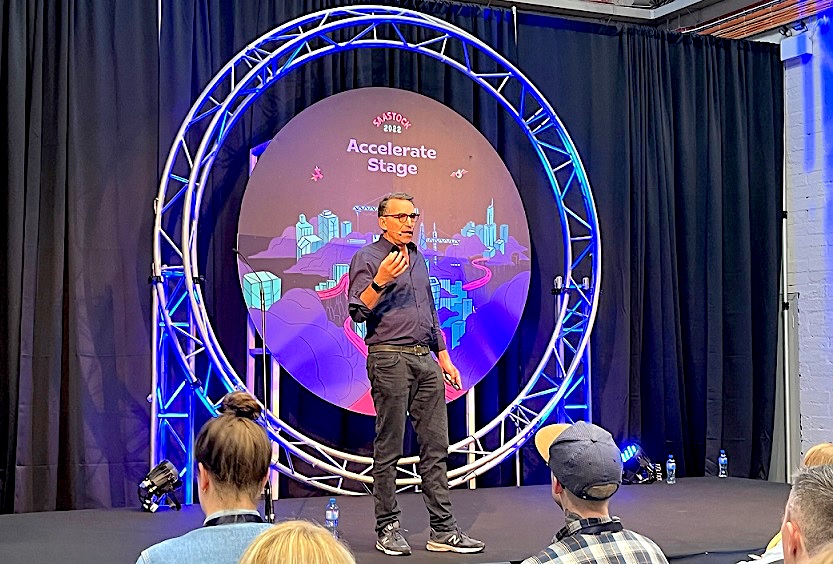 For nearly four decades, Jeff Kofman covered major events for ABC News across the globe. He narrowly escaped a firefight during a coup in Haiti, spent five tours covering the Iraq War, and watched a man die in front of him during an insurrection in Honduras. All of this was preparation for his current role as chief executive of a startup software company.

The Emmy award-winning TV journalist learned a great deal about not panicking during a crisis, clear communication, and how others will try to shape your story. He has applied this to a new career leading Trint Ltd., a software-as-a-service speech-to-text AI platform for transcribing interviews. Trint has received a major investment from The New York Times, and Airbnb Inc., Nike Inc. and The Washington Post are clients.

“The best software solves problems that we didn’t know we had,” said Kofman (pictured), who spoke with SiliconANGLE during an appearance at SaaStock this week in Dublin, Ireland. “When you’re running a SaaS company, thankfully it’s not life or death.”

Trint, a portmanteau of “transcription” and “interview,” was among the more than 100 startups on display for 5,000 attendees who ventured to Ireland for a three-day update on the state of the SaaS industry. The status report, as captured in part by a presentation from the venture capital firm Accel, was a mix of sobering news and optimism about the future.

Accel’s 2022 Euroscape report showed that $1.6 trillion of market capitalization had been lost in the global European Cloud Index, with average forward revenue estimate multiples dropping from 17 times a year ago to six times today. Cloud funding on the private side in Europe, Israel and the U.S. was down 42% and SaaS multiples ranked below the 10-year pre-COVID average.

But despite the big reset in valuations, Accel believes there is a potential rainbow hiding behind the storm clouds. The Accel executives cited continued enterprise movement into the cloud and rising interest in security and crypto solutions as signs that good times may be ahead.

“Is it all doom and gloom?” Philippe Botteri, a partner at Accel, asked during his presentation. “We don’t think so. The trends for a push to cloud are still there and are still very strong.”

The venture capital community had a significant presence at SaaStock this week, providing at least one indication that the investor community has remained interested in SaaS companies.

During one panel discussion, a venture capitalist noted that prospects were far brighter for software firms than those operating in the consumer markets in the current period of high inflation, tight capital and market uncertainty.

“We should all be thankful that we’re at SaaStock rather than ConsumerStock,” said Alex Ferrara, a partner at Bessemer Venture Partners. “It’s been far worse for consumer-focused companies. A lot of SaaS businesses continue to chug along.”

Consolidation may be coming

Bessemer has invested in several SaaS-focused companies that illustrate the expanding diversity of enterprise applications. These include Vertice Ltd., a London-based SaaS purchasing platform that helps businesses reduce software spending by 20% to 30%, and Optibus Ltd., a software platform for transit agencies that became the first public transportation unicorn in May.

Despite traction among by a growing number of SaaS startups, Ferrara believes the software industry is headed toward a shakeout, as some firms struggle with overhead expense for sales and marketing.

“I think there’s going to be a big wave of consolidation that happens over the next several years,” said Ferrara, who spoke with SiliconANGLE following his SaaStock presentation. “There’s a high cost of sales. I think a lot of companies are going to discover it’s not viable to really scale a large sales organization.”

Europe on the rise

Ferrara did not have to make a long trip from the U.S. to attend SaaStock. Bessemer opened an office in London two years ago and Ferrara relocated from New York to be closer to the firm’s growing portfolio of companies in Europe.

His move offered additional evidence for Europe’s growth as a market for enterprise tech. Five years ago, a former yacht skipper named Hanno Renner was operating a small HR software company over a bakery in Germany. Today, Renner’s firm – Personio GmbH – has become one of Europe’s most successful startups, with a valuation topping $8 billion and offices in Berlin, Madrid, Amsterdam, Dublin and Barcelona.

In an appearance at SaaStock, Renner described how the European market was ideally suited for his cloud-based HR software offering, tailored to meet the needs of small and medium sized businesses. “Our SMB market in Europe is actually bigger than in the U.S.,” Renner noted.

Although perceived by some as still playing catch-up with other areas of the world in the development of key technologies, Europe is beginning to show signs of emerging as a growing and influential tech market on its own. The Accel report released earlier this week showed that cloud software unicorns in Europe and Israel raised $44 billion over the past two years, which researchers believe will fuel valuation despite the down economic cycle.

Perhaps more intriguing was Accel’s finding that Europe has begun to show greater geographic diversity in its tech landscape. Out of 33 new unicorns created in 2022, 11 of them were from smaller hubs such as Switzerland, Belgium, Estonia and Ireland.

Trends such as these have not gone unnoticed by the venture capital community, which has a significant amount of money on the sidelines during the current economic downturn, according to one investor. “There’s never been more dry powder in the European ecosystem than there is right now,” said Annalise Dragic, a partner at Sapphire Ventures. “There is a huge pool of capital looking for a good home to invest.”

When investors open their wallets again, they will find an intriguing European SaaS market populated by newly minted entrepreneurs such as Kofman, who swapped dodging bullets in war zones for pitching his London-based transcription service to potential enterprise software buyers. For Kofman, the motivation to fix a pain point for transcribing interviews catapulted him into a new profession and onto the SaaStock stage.

“I saw the opportunity to solve this problem for people with my job,” Kofman said. “I had no interest in tech, I didn’t even know what SaaS was. I made Trint for me.”