The teen’s cell was last pinged at “33 minutes after midnight” on August 6th, police say

Detectives searching for Kiely Rodni found a surveillance video from a local Truckee, California business that places the teen’s whereabouts just hours before she went missing.

Kiely was seen on August 5th at 6:08 PM in the footage wearing clothing consistent with witness accounts.

Authorities say, as shown in the screen grab released to the public, she was “last seen wearing a black spaghetti strap bodysuit, green Dickies brand pants with a black grommet belt, and black Vans shoes.”

The teen’s cell was last pinged at “33 minutes after midnight” on August 6th, police say.

Read the latest update from the sheriff:

Rodni was last seen around 12:30am on Saturday near the Prosser Family Campground in Truckee, CA — near Lake Tahoe and the Nevada border — where she reportedly attended a party with around 100 other young adults.

The girl’s mother, Lindsey Rodni-Nieman, said the party was for graduating high school seniors in the area, adding that her daughter graduated with honors at the age of 16.

The 5’7″, 115 pound teen has blonde hair and hazel eyes and multiple piercings.

Authorities released a video plea from Kiely’s mother to the community.

“We just want her home. We’re so scared and we miss her so much, and we love her so much,” said Rodni-Nieman in the footage. “Kiely, we love you and if you see this, please just come home. I want nothing more than to hug you. If anybody else out there, if you know where she is, if you know anything about where she might be, if you have any ideas of thoughts, please come forward and share them.” 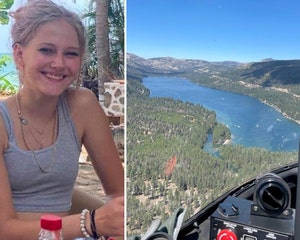 “And we’re not looking to like bust anybody else or get anyone in trouble, we just want to see our daughter home,” added her mother, who said Kiely texted her parents that she was heading home around 12:15am.

Sami Smith, a friend who attended the party with Kiely, told CBS, “I know that she wasn’t in the right mindset or state to drive. And if she were to have driven, she wouldn’t have made it far.”

She added, “So my concern is that somebody might have offered to drive her home and then didn’t take her home.”

Anyone with information on Kiely’s disappearance can contact 530-581-6320 and press 7. Callers can remain anonymous.