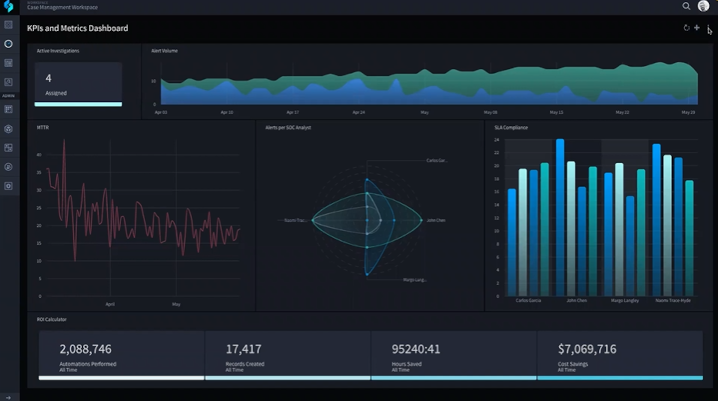 Swimlane Inc., a startup working to make enterprises’ cybersecurity operations more efficient, today announced that it has closed a $70 million funding round led by Activate Capital.

Swimlane provides a platform called Turbine that enables companies to create automation workflows, or playbooks, for performing cybersecurity tasks. A company could use Turbine to create a playbook that automatically scans the network traffic received by an application for malicious requests. It’s also possible to create playbooks that perform multiple tasks.

Historically, creating cybersecurity automation workflows often involved writing custom code, which can require a significant amount of time and effort. Swimlane’s Turbine platform provides the ability to create playbooks through a low-code, drag-and-drop interface. According to the startup, its platform eases administrators’ work and thus makes it more practical to introduce automation into a company’s cybersecurity operations.

Automating manual work enables administrators to focus on other tasks. Moreover, the technology helps organizations respond to potential hacking attempts faster. Because it’s automated, a playbook can respond to a potential cyberattack immediately without waiting for manual input from an administrator.

Swimlane has also equipped its Turbine platform with other features designed to save time for administrators. The platform largely automates the task of collecting data about potential hacking attempts from a company’s systems, which is usually a complicated process. A built-in dashboard organizes the key technical details about a hacking attempt in one place to ease breach investigations.

Large enterprises often rely on dozens of cybersecurity tools to secure their networks. As a result, responding to a potential breach often requires administrators to use multiple tools. Swimlane has equipped Turbine with shortcuts that enable administrators to perform common tasks in their company’s other cybersecurity tools without leaving the platform’s interface, which saves time.

Swimlane provides Turbine in both on-premises and cloud editions. On occasion of its funding announcement today, the startup disclosed that the number of organizations using the cloud edition of Turbine increased by 500% in 2021. Swimlane further claims to have achieved a net retention and product expansion rate of over 120%, which means that existing customers increased their spending on its platform.

“We invested in Swimlane because we believe in the company’s ability to unlock the most valuable product developments customers demand for security automation inside and outside the SOC,” said Activate Capital Managing Director Raj Atluru. The SOC, or security operations center, is the team in a company that focuses on detecting and responding to cyberattacks.

Swimlane will use the new funding to grow its international presence. As part of the effort, the startup plans to expand its partner network and build more cybersecurity automation features.