“She’s like, ‘Definitely, you should do it, you’re going to love it.'”

“Real Housewives of New Jersey” star Teresa Giudice is opening up about how fellow “Housewife,” “RHOA” star Kenya Moore, influenced her decision to join “Dancing with the Stars.”

In an interview with Page Six on Thursday, the 50-year-old Bravolebrity revealed her “Real Housewives Ultimate Girls Trip” co-star encouraged her to compete in Season 31 of the reality competition series after she had previously declined in 2016 following her time in prison. 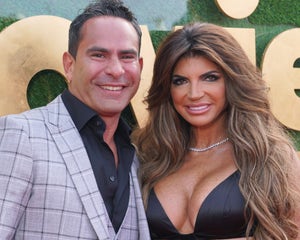 “We just did the ‘Ultimate Girls Trip’ together, and that’s my girl! We have never worked together before, and then she, like, stuck up for me against Ramona [Singer],” Teresa said, referencing the “RHUGT” drama with Ramona last year.

Since Kenya, 51, was a contestant on the last season of “DWTS,” Teresa said the “Real Housewives of Atlanta” star was the right pal to consult with in order to help her decide whether or not to take on the opportunity.

“I was like, ‘I’ve been asked to be on ‘Dancing With the Stars,’ what do you think? Should I do it?’ And she’s like, ‘Definitely, you should do it, you’re going to love it,'” Teresa shared.

The reality star added that Kenya told her competing on the show is going to be “a lot of work.”

The Bravo star passed on the opportunity to be on “Dancing with the Stars” back in 2016. She said she turned it down at the time because she had just returned from prison. Teresa was released from prison in December 2015 after serving 11 months for fraud.

“It’s better now, because — I hate to say the word, prison — but I got asked to be on ‘Dancing With the Stars’ as soon as I came home. And I remember I was struggling with it,” said Teresa, who shares daughters Gia, 21, Gabriella, 18, Milania, 16, and Audriana, 13, with ex-husband Joe Giudice.

She added, “The kids were still young and I just got home and I didn’t want to leave them … I was very torn. But then I couldn’t do it anyway because I had to be on Bravo first [for ‘RHONJ’].”

The official cast of Season 31 of “Dancing with the Stars,” which will air on Disney+, was announced on “Good Morning America” on Thursday, which coinicdentally marked the birthday of Teresa’s late father, Giacinto Gorga.

“It’s been a dream come true because I’ve been watching ‘Dancing with the Stars,’ I mean, forever. I watched it when my dad was living with me, with my dad. And today’s my dad’s birthday,” Teresa told Page Six. “So it really was meant to be. So, yeah, he’’ looking down on me and I know he’s really proud.”

Teresa is the latest member of the “Housewives” franchise to join “DWTS.” In addition to Teresa and Kenya, other past “Real Housewives” who appeared on the show include Lisa Vanderpump, NeNe Leakes, Erika Jayne and Lisa Rinna.

Joining Teresa this season, who will be paired with pro Pasha Pashkov, are TikTok star Charlie D’Amelio and her mother Heidi, “Jersey Shore’s” Vinny Guadagnino, actress Selma Blair, and more.

See all of the celebrities who will be competing in “DWTS” Season 31 in the gallery, below. “Dancing with the Stars” premieres on September 19 on Disney+.