“They told me that their mom kept them locked in the laundry room, naked, zip-tied from the ankles and handcuffed from the wrists,” said the woman who opened her door.

A pair of 16-year-old twins in Texas went door-to-door pleading for help this week, after allegedly escaping handcuffs and their abusive home.

The pair reportedly ran from home to home for about a half hour on Tuesday morning, as security cameras captured their movements around their neighborhood. At one point, the two were seen asking one man, “Please, can you let us in, please? We just need somewhere to be right now,” showing handcuffs they allegedly removed from their wrists before being turned away.

Eventually, a single mother in another neighborhood opened the door when the two — a brother and sister duo, both barefoot and one shirtless — reached her stoop.

A spokesman for Harris County Constable Precinct 5 told NBC News the pair said they had escaped their home, where they “had been handcuffed and held against their will by their mom.”

The spokesperson added, “It was obvious to us and the fire department that the children were in distress. They had marks on their wrists, pretty deep marks from the handcuffs. They were bruised and malnourished in our eyes.”

The teens had only recently moved into the area and didn’t know their home address, meaning it took authorities a few hours to find where they lived. Their mother Zaikiya Duncan (above left), 40, and boyfriend, Jova Terrell (above right), 27 were MIA when they arrived, as were Duncan’s five other children. Ted Heap, Harris County Constable Precinct 5 issued an Amber Alert for the parents, saying they were “in the process of being charged with Injury to a Child.”

Duncan and Terrell were later apprehended by Louisiana State Police and all five children were “deemed safe.” The two will be returned to Texas, where authorities say they’ll likely face injury to a child charges. All seven children were reportedly placed in Child Protective Service custody. 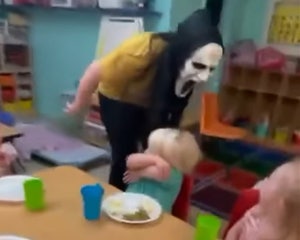 “I sat them down, I brought them blankets, covered them up. And the first thing the little boy said was, ‘We’re starving,'” the woman who answered the door told KHOU. “The little girl was here standing, and she was visibly shaking and showing me her handcuffs, saying, ‘We just broke out of these.'”

“They said, ‘We would pee and poop on ourselves.’ And they said when [they] needed to bathe, the mom would let them use the dirty mop water to bathe,” she added. “They didn’t get a bath. They got dirty mop water.”

They said they hadn’t eaten in a week and claimed “their mom kept them locked in the laundry room, naked, zip-tied from the ankles and handcuffed from the wrists,” added the woman, who took photos of the cuts on their wrists from the handcuffs and shared them with the outlet.

Per charging documents obtained by KHOU, the boy claimed his mother once gave him 24 Benadryl tablets to get him to go to sleep, prompting a seizure. She was also accused of pouring bleach down their throats and on their genitals, as well as beating them.

They reportedly escaped after the boy found the handcuff key in his mother’s purse and hid it in his mouth until they could make a move. 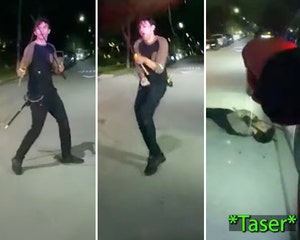