THIS wasn’t even a good fight for 11 rounds and two minutes, not even close. But it scrapes the list due to the astonishing late drama. Briggs trailed by three points on two cards and a point on the other when the American had the Russian wobbling and then dropped him. Liakhovich dragged himself up, but Briggs looked too tired to finish him. Time was running out when Briggs sent Liakhovich crashing out of the ring and the fight was waved off – with one second left!

HARRY CARPENTER said this “didn’t resemble anything to do with boxing… it was on-the-cobbles stuff”. A fair assessment of a brawl won by Pearce, who outlasted Ferris, clobbering him to his knees for a fifth-round finish.

GALENTO was a fat New Jersey bar owner who drank beer, smoked cigars – and gave one of the greatest heavyweights in history a real scare. The human beer barrel known as “Two Ton Tony” shook up Louis in the opener before being dropped himself in the second.

Galento did the unthinkable in the third and floored the champion with a left hook, but it wasn’t a heavy knockdown and try as he might, Galento couldn’t find another punch like it. Tony was ruthlessly punished by Louis before being counted out in the fourth.

COMPLETE chaos as “The Gypsy King” came to Madison Square Garden. Dropped in the second by a hopeful right-hand swing he didn’t see coming, Fury was shaken up again in the fourth and the crowd were on their feet in the next as the rivals hurled punches at each other like a pair of Saturday night revellers settling a score. The size, chin and fighting heart of Fury pulled him through as he clobbered the former cruiserweight boss to the canvas in the seventh.

WHYTE won when they were novice amateurs and, after taking a socking in the opening round, had Joshua all over the place in the second round of their British title fight. But Whyte was too wild, and quickly too tired, to finish off Joshua and was blasted out with a spectacular uppercut in round seven. 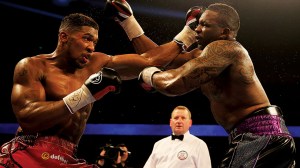 Anthony Joshua and Dillian Whyte exchange during their British and Commonwealth heavyweight title contest at The O2 Arena on December 12, 2015 (Richard Heathcote/Getty Images)

HOLMES handed out a licking for six rounds before disaster seemed to strike in the seventh in the shape of a full-blown Shavers right hand. How Holmes managed to beat the count remains a mystery; when Shavers landed as sweetly as he did here, those on the receiving end rarely got up. Not a great fight, necessarily, but Larry finding his feet and victory, is one of heavyweight history’s special moments.

THIS ferocious fight swung one way, then the other – and then back again. Though the more tired of the two, Dokes was still landing punches until midway through the 10th when Holyfield smashed him dizzy with left hooks and the referee jumped in.

CHISORA had lost three of his previous six and spent much of this fight under fire, so much so plenty wanted it to be stopped – until the eighth. From nowhere, Chisora found a right hand – arguably the best he threw in his entire career – that toppled Takam and then another to complete a jaw-dropping turnaround.

NOT exactly high drama through nine rounds as Moorer picked and poked the 45-year-old en route to what looked a certain points victory.

But this contest became one of the ages in round 10 when Foreman connected with a right hand, Moorer folded to the floor, and Big George became the oldest man to be crowned king.

BOTH Olympic champions were shaken and damaged as thunderous combinations landed throughout, but Lewis overturned an early points deficit to grind out a majority win on the scorecards. It remains one of Lewis’ gutsiest and most underrated showings.

BEATING Mike Tyson wasn’t the highlight of Williams’s career. It was this. He dislocated his right shoulder in the third yet dutifully chased the impossible with his left. That stunning moment occurred in the sixth. “If it happened in ‘Rocky,’ you’d say the story was ridiculous,” said Williams. 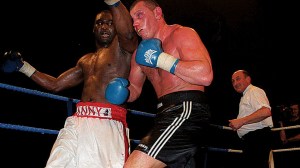 OFTEN a slow starter, “Smokin” Joe briefly lost control of his legs after the Mexican cracked him with a right uppercut in the first, but once Frazier got his head moving and his left hook working, the fight turned his way.

He had Ramos in trouble late in the first and bludgeoned him to the canvas with left hooks twice in the second.

AFTER a reportedly dull 20-round maul a few months earlier, Jeanette and McVey were told more was expected of them in the rematch. There were an estimated 38 knockdowns in nearly four hours of fighting! McVey had his right eye swollen shut, his nose broken and after 49 rounds, he couldn’t take any more.

QUARRY won the opening round and had to show tremendous spirit to get through the next six. Though he kept firing back, Quarry had his right eye closed by Frazier’s trademark left hook and the doctor pulled him out before the eighth.

CHISORA threw a table at Whyte during the heated press conference that almost got the fight pulled by the Board. They went on to throw the kitchen sink at each other for 30 minutes on fight night to upstage the Anthony Joshua-Eric Molina world-title clash.

Whyte won the last round on all three cards to snatch victory, but there were those at ringside who had it the other way.

THIS was always going to be a fun fight between veteran warmongers and they seemed to enjoy knocking seven bells out of each other as much as the crowd enjoyed watching them do it. Rogan and Skelton swapped smiles and nods of appreciation throughout 10 gruelling rounds before Rogan kept finding Skelton’s chin with short punches in the 11th and he dramatically fell apart.

THE night “The South American Beatle” gave Frazier a hard day’s night, dropping him twice in the second round. Frazier went on to dish out a lot of punishment, but the pro-Bonavena crowd at Madison Square Garden booed the decision.

CHUVALO battled Muhammad Ali (twice), Joe Frazier and George Foreman – but the Canadian said Patterson gave him his hardest night. Boxing News reported “both boxers took a severe beating” and Patterson was on the receiving end in the sixth, seventh and eighth before he got his boxing together in the closing rounds.

A HELLACIOUS affair that saw both exchange brain-shuddering blows in each of the 12 rounds they shared. Though Mercer dropped Cooper in the first round, and ended up a fairly lopsided winner at the end, the two-way violence on display was mesmerising throughout. 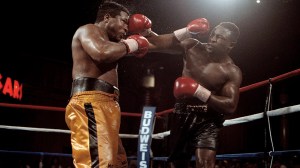 ATLANTIC CITY – AUGUST 5,1990: Bert Cooper and Ray Mercer during their fight at the Convention Hall in Atlantic City, New Jersey (The Ring Magazine via Getty Images)

UP on all the cards going into the last round by five, three and three rounds, Tate only had to stay on his feet to retain his WBA strap. There was little indication of any drama until midway through the 15th when Tate suddenly appeared to tire, a result of Weaver pummelling his body. Weaver got his head on Tate’s chest and whipped over a short left hook to his jaw to send him crashing. The fight was over – only 45 seconds from the final bell.

NEITHER could miss with their back hand and both were on the floor in the third. When they landed bombs simultaneously in the fourth, Sanders went down and Rahman only just stayed upright. Rahman forced the finish in the seventh with an unanswered barrage of around 20 punches.

ONE of the most anticipated fights in history was won by Holmes in round 13. The champion bossed large portions of the contest but the heavily hyped Cooney played his part throughout the absorbing and gruelling battle. If you haven’t seen this one for a while, it’s well worth a revisit – you might be surprised by how well Cooney fought.

“DERRICK JEFFERSON, I love you!” gasped Larry Merchant, forgetting himself at the sight of the convict-turned-caretaker-turned contender laying out Harris with a booming left hook. Before that, Harris had been floored twice and dropped Jefferson himself in the second. In the sixth, Harris was down again only to have Jefferson on the brink of being stopped before they both launched left hooks at the same time.

SEVEN knockdowns in eight minutes, 43 seconds – and plenty of wobbles as well – when these fringe contenders clashed. Southpaw Sellers was first to hit the deck in the second round, but by the end of the session he had dropped Stewart twice. The London-born New Yorker was down again early in the third, got up to aim at left hook at Sellers’ chin just as Sellers launched a straight left. Both punches landed simultaneously – and Sellers went down. Stewart dropped him twice more.

DAYS before Holyfield’s homecoming, he was looking for an opponent after Francesco Damiani pulled out through injury. Bert Cooper, who learned his cross-armed defence and slugging style from mentor ‘Smokin’ Joe Frazier, got the job and 90 seconds into the fight, he looked to be out of his depth. First, he spun himself around 360 degrees after missing with a left hook and then Holyfield dropped him with body shot. Cooper came back swinging and in the third he countered Holyfield’s left hook with a short right to the chin and the champion staggered. Cooper unloaded to propel Holyfield into the ropes and referee Mills Lane gave him an ‘eight’ count. By the final minute of the round, Cooper was on rubbery legs, but he kept taking Holyfield’s best shots and firing back – until the seventh.