DESPITE the quality produced by its frontline workers, 2022 was the year the boxing industry twerked for fast food and then had the temerity to sell it on to its loyal customers as gourmet. It was the year the sport finally got with the times, in other words, and did its best to attract a new audience while simultaneously insulting the existing one by serving up tainted produce at inflated prices (as well as offering additions to the menu nobody asked for).

It was a strange old year, even by boxing’s standards. There were new faces all over the place: in the ring, along row A, in punditry and commentary boxes, and in press areas, too. Some were welcome. Others less so. Some arrived with good intentions, their passion for the sport obvious, whereas others were in town only to loot and wreak havoc.

Still, having long been told boxing is a sport stuck in the dark ages, at least we now know what moving with the times looks like. It looks like an open invitation for anyone who is anyone – internet famous, ideally – to try their hand at the sport, irrespective of how this makes the sport appear in the process. Not just that, moving with the times seemingly allows anyone to “cover” the sport, as well permits its promoters to sit back, put their feet up and use social media as their sole promotional tool, shifting the blame fully on fighters if and when they start to complain about a lack of opportunities. “Do it like the YouTubers,” they might say. “Have you not learned anything from KSI and Jake Paul?”

It stands to reason perhaps that it would go this way. Boxing has, after all, always mirrored society and never has it been truer today that to get ahead in the world you must tell the world who you are, what you are, where you are, what you do, what you think, and why everybody needs to listen to you – at all times. Do that, it seems, and you’re onto a winner. Yet, go the other way and you risk becoming, like many small-hall boxers with just a handful of “followers”, something of an outcast; a forlorn figure whose voice isn’t loud enough and in whom any investment makes very little sense. 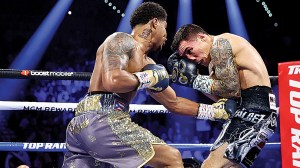 This time last year, when trying to focus again on “real” boxing, I found myself drawing up a list of 10 fights I hoped to see get made in 2022, atop of which was a welterweight clash between Terence Crawford and Errol Spence, followed by a heavyweight one between Tyson Fury and Oleksandr Usyk. Those fights, sadly, never did get made in 2022, of course, and, sadder still, they remain as vital today as they were 12 months ago and, had I been bothered to do another one, would have topped whatever list I compiled for the coming year as well.

In the end, though, once bitten, you learn your lesson. Indeed, a quick scan of my top 10 list from last year reveals that just one of the 10 fights mentioned actually materialised in 2022 (Shakur Stevenson vs. Oscar Valdez in April), with the other nine either mooted only to never happen or never even considered in the first place. What’s maybe most galling, however, is that, despite the presence of rankings in boxing (therefore some supposed structure and order), it remains almost impossible to predict which fights will be made heading into a new year. Which is to say, just because the number one and number two in a division should compete against one another doesn’t necessarily mean they will – at least not in a sport like ours.

Moreover, this issue has likely been exacerbated by the recent influx of influencers, YouTubers, unscrupulous advisors and various streaming services happy to make promises they usually can’t keep to boxers prone to bouts of delusion when it comes to their own worth. Now, as a result, we have boxers biding their time to such an extent that boxing twice a year is viewed as a gruelling 12 months. Now we have boxers becoming pay-per-view “stars” quicker than they should because that, it turns out, is the only way promoters and television networks can afford to pay what headliners have come to expect. Now, as we head into 2023, we have the prospect of any half-decent domestic fight carrying a pay-per-view tag because, in investment terms, boxing is no longer seen as marriage material but instead a one-night stand. Now we have big names at the top of the sport strutting around with an air of entitlement that is for the most part undeserved and unwarranted, yet is much in keeping with the attitudes and ignorance of a world increasingly “online”. Now, having entered that world in search of both cash and clout, boxing must next year do all it can to avoid becoming The Influencer’s Boyfriend; standing there, phone in hand, grinning gormlessly with dead eyes as he is asked by his girlfriend to take another picture of her pouting for likes.