STANDING 6ft 4in and weighing over 17 stone, Jared Anderson is not exactly inconspicuous but the rising star of American heavyweight boxing wishes he did not burn so brightly. In fact, he hopes that by the age of just 26 he has faded away completely.

While most in his position would be boastfully predicting a decade of dominance punctuated by countless belts and crossover fame, 23-year-old Anderson has gone completely the other way. “I only do this because I’m stuck with it,” he says with a shrug.

That initial adhesion happened when he was just eight years old, his first bout came about a year later and by the age of 15, when he won a national title and then competed at the junior worlds in St Petersburg, Anderson started to think there could be a future in the sport for him.

Now, within nine years of that epiphany, he speaks like a man who has been plugging away for a lifetime. “I got good at it, and then got stuck with it,” he adds.

“But this is my revenue and I’m good at it, I can make some money out of it. By the age of 26 I want to be finished in boxing, 100 per cent. The long-term goal is to acquire generational wealth – in three years? – I can do it, all I need to do is fight the right names. Fight bigger names, become world champion, if not undisputed, and then get out.

“Then I’ll probably fall off the face of the earth. I think I can do that in two years, maybe three. Within four I will be gone.”

He is currently just three years into his professional career and has so far racked up a 12-0 (12) record, which represents an average of just four fights a year. Even for a man in no hurry at all, that is hardly rapid. He goes for the 13th time this weekend when he takes on the experienced Jerry Forrest at Madison Square Garden. It is his first 10-rounder but he is not expected to go the distance.

What is more likely is another statement knockout and more adulation for the man tipped by many to emerge from the current clutch of young, promising heavyweights as the king of them all.

“It just feels like it’s growing and growing,” he adds. “Every time I go out I get more followers, bigger shine and stuff like that. But I honestly don’t want to be known.

“But I know that’s what is coming and there’s nothing I can do about it. I’m stuck with it now. When I was a kid I never watched boxing, I still don’t. I don’t pay attention. I feel like that helps me to just turn up and fight.

“I’m good at it but I don’t like people noticing me. I want to grocery shop in peace. I’m getting ambushed and then if you don’t stop then that’s not nice, it’s a bad image. So now I can’t relax? I just want to relax in my own skin and not be bum-rushed. I don’t like being around people all the time.” 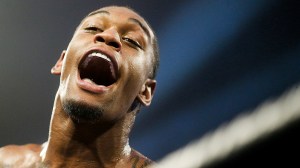 Even with all that being said, Anderson, known as “Big Baby”, is acutely aware of the role boxing has played in turning his life around. Currently residing in Houston with his two dogs Azul and JR, Anderson was never far from a very different life.

“I grew up in Toledo, Ohio but I left there two years ago. It’s not a good spot, there’s not much going on – but a lot of jealousy, hate and drug use. There are a lot of opiate overdoses in that state. It’s bad. One of my first cousins died from a heroin overdose.

“Those drugs are definitely an easy way to make money and I guarantee that if I wasn’t boxing I’d be out there selling it. Boxing and my surroundings kept me away from all that. My mum was tough on me and then when I got old enough to hang around with my brother and his friends they were the ones that kept me out of all that – they saw how much I was involved in the boxing.”

And it is that big brother who provides him with what seems like one of his key reasons to box at all. It is now nine years since Adam Anderson, known as Dub, was sentenced to 22 years in an Ohio penitentiary. Adam is the reason why Anderson decided to make his ringwalk for his last fight, against Milijan Rovcanin in August, wearing prison overalls and shackled at the hands and feet.

“That was more or less about him and his situation,” explains Anderson, wearing a hat which reads ‘FREE DUB’. “I’m trying to shine light on that. That was my goal.

“I speak to him a lot. I wish he was closer to us but me and my mum really don’t need to be in that city anymore. Hopefully he doesn’t have to do all his time and we are able to get him out of there a lot earlier than what his sentence is.

“But all my fights are on ESPN so he can watch them inside. It feels like a connection to him even when he’s inside and that’s another reason for doing the outfit like that. I knew he was going to see the fight so I did that for the ringwalk.

“He gets shown a lot of love inside for being my big brother, he said somebody just walked up to him one day and gave him some extra food just because he’d seen my fight. They’re looking out for him because of me. I think he will do two or three more years.”
It sounds as if he is timing his brother’s release with the closing stages of his own boxing career. “Bingo,” he says, finally flashing something approaching a smile.

“Then I want to explore the world; there are a lot of places I haven’t been but want to go and there’s a lot of things I want to do but haven’t done. I’ll do all of them. I don’t get much down time from boxing.

“I’ve been all over: Poland, Holland, Nicaragua but all those places I’ve been for boxing. Actually the only place I’ve ever been on vacation is Cancun. I want to go to Jamaica, Hawaii, Dubai, Spain, Brazil, everywhere. I want my brother to travel all over with me – we just have to get him off papers!”

Victory on Saturday will nudge him closer to the heavyweight top 10. Given that the likes of Tyson Fury and Oleksandr Usyk are clearly in the closing stages of their careers, it is a division on the verge of great flux. Anderson’s quick-fire smash-and-grab might just pay off.

“I’m going to get it all done and then be gone,” Anderson says. “I’ll be cool without boxing.

“This is not by choice, I’m not here by choice. I wouldn’t be doing it if it was my choice but I’m good at it. It’s up to me to make it count.”