“Then quit!” exclaimed Mike, after Angelina told him to stop getting “involved in my f—ing business.”

The tension between Angelina Pivarnick and some of her “Jersey Shore Family Vacation” costars carried over into this season’s reunion, which aired in two parts on Thursday night.

In the second half of the special, things got pretty heated between Angelina and Mike “The Situation” Sorrentino, after it was brought up that Mike floated out the idea of having Pivarnick’s ex, Chris Larangeira, on his podcast. He has insisted it was a joke, but Angelina wasn’t having it, as she saw it as another instance of Mike meddling in her affairs. 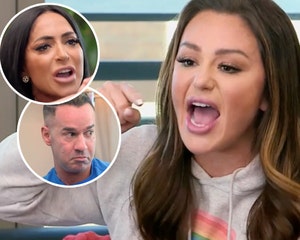 As she pleaded with him to stay out of her life, he hit back, saying, “But Angelina, you have to admit, the streets were very messy … You’re a reality star, you signed up for this 14 years ago, sweetheart.”

When she said he was airing her “real life, my real divorce, my real s—” on the show, he again reiterated that they’re all “paid to talk about” their lives for the show — before accusing Angelina of having “a condition known as lie-abetes.”

“And you’re the Snitch-uation,” she shot back. “You got involved too far, man!”

He acknowledged that he did taken things too far, but also wanted her to “take a little bit of accountability” as well, claiming she had “multiple side pieces.” She, of course, denied that — and said her hookup with “All Star Shore” costar Luis “Potro” Caballero happened after she and Chris “were done.” Angelina then exclaimed, “Don’t get involved in my f—ing business anymore!”

He continued to say that’s what they signed up for, as the two started arguing back and forth over host Justina Valentine.

“You get paid to talk about your f—ing life!” he said, telling her to “quit” if she didn’t want to keep it real. “You play the victim all the time. Don’t be fooled by somebody who plays the victim in the storm that they created,” he then shouted, as she kept yelling, “My f—ing marriage is not your f—ing business.”

“It’s not anybody’s business on these couches,” she added, before Mike had clearly had enough. “The only way to work with someone that is toxic, you just can’t play anymore,” he said, before getting off the couch and walking out of the studio.

While Snooki asked for more wine and a giddy Pauly D said he’d “always wanted somebody to walk out of a reunion,” cameras followed Sitch backstage as he vented to a producer. 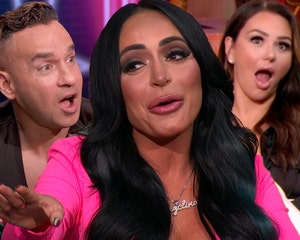 “Yeah, I just need a minute. I don’t care if she has 15 side-pieces. It’s not a perfect world. I don’t want perfection from her. I just want her to be honest with me, be a good friend, tell me the truth,” he said. “Have a little bit of accountability, you’re a reality star. This is what you do for a living, to be full disclosures and share your life with us and the world, that’s what we do. That’s what I have trouble with, her honesty.”

It didn’t take too long for him to return, but when he did he said he was “good” and simply doesn’t like arguing.

“It was just not really getting anywhere and we’re in such a better place now. I just went to cool off. I’m good,” he explained. “I’m not gonna leave my squad hanging. I really do love these guys, even Angelina, we’re in such an awesome place. She’s in group chat now, we side text.”

After admitting to trying to “exit the conflict,” the two hugged it out before the reunion reached an otherwise conflict-free conclusion. 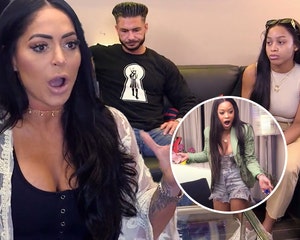