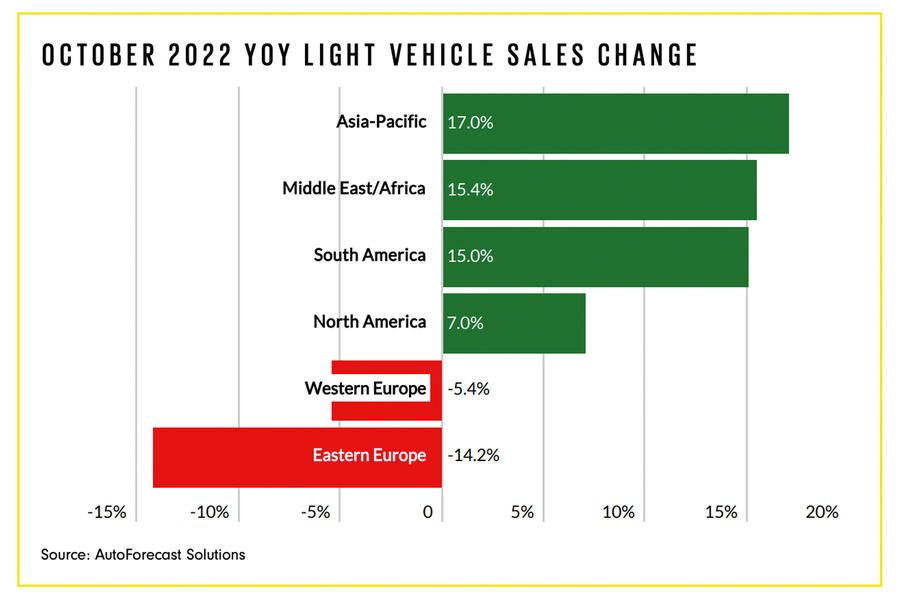 Sales in the EU are doing no better. Last year, the EU slipped 2.4% from 2020’s sub-10 million total, itself down 24.5% from 2019. This dismal track record continues in 2022. When all of the numbers are in, this year will fall below 8.7 million units of light vehicles, an additional 10.8% lower than last year’s terrible showing. A slight recovery in 2023 won’t push sales volumes back over nine million units and the region won’t return to 10 million units before 2025.

US light vehicle sales rose 9.5% in September, powered by a few major players. With slightly improving inventory levels, Toyota, Hyundai, Subaru and General Motors found more buyers last month than they had a year prior, while sales at Ford, Stellantis and Nissan fell. GM’s improvement was thanks, in large part, to increased sales to fleets as retail sales lagged behind the overall market.

Sales in Canada were down 9.6% in September, which was as expected. Inventory shortages remain the biggest stumbling block to market growth and no remedy is on the immediate horizon. With just one quarter left in the year, the outlook for 2022 remains at 1.5 million units, followed next year by marginal growth of just 6%, taking the market above 1.6 million vehicles.

The 4.8% rise in sales in Mexico was right on forecast for September, following last month’s sales growth. Again, two months do not make a trend, but this does follow the slowing inflation in the country as a positive sign for future growth. Light vehicle sales are still on pace for 1.05 million units this year.